Violence Among Teens and Young Adults Declines, and Other News 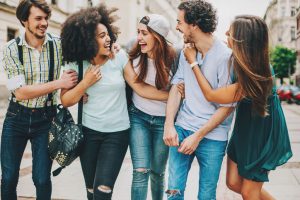 Media portrayals often depict teens and young adults as out of control or increasingly violent, but research does not support this depiction. Youth violence declined from 2002-2014, according to research published in the American Journal of Public Health.

The study gathered data from the National Survey on Drug Use and Health, which looks at violent behavior such as fighting and attacks among teens ages 12-17. Data showed a decline in youth violence from a peak of 33.6% in 2003 to a low point of 23.7% in 2014.

Researchers saw decreases in all ethnic and racial groups. They suggest parents, educators, and other adults need to continue developing and using evidence-based violence intervention strategies to encourage further declines.

Pediatricians often refer children and adolescents experiencing psychological distress to mental health clinics. A new study, however, suggests brief behavioral therapy in a pediatric clinic is a more effective option. After 16 weeks of either outpatient therapy or the behavioral therapy intervention, 57% of those who got help in a pediatric setting significantly improved, compared to 28% who were referred elsewhere.

The Emotional Impact of Breast Cancer

A breast cancer diagnosis can be emotionally devastating. Severe shifts in health and appearance can further compound this impact. Breast cancer treatment can also trigger emotional difficulties, particularly because drugs such as tamoxifen may cause painful physical and mental health side effects, including depression.

6 Tips to Reduce Your Daily Stress and Anxiety

According to a study of mice, the chemotherapy drug temozolomide—which is frequently prescribed for brain cancer—may make users more vulnerable to depression. Mice who received the drug engaged in fewer pleasure-seeking behaviors, and they showed a decrease in growth of new brain cells in the hippocampus—a region in the brain associated with memory and emotion. They also showed deficits in novelty processing. These behavioral changes are linked to depression in both humans and mice.

Advice to improve relationships frequently focuses on improving communication. Couples seeking to strengthen their relationship might also want to think about sex more often, according to a study that will be published in the journal Personality and Social Psychology Bulletin next month. Sexual thoughts can improve intimacy and communication, which can help couples bond.

Does Depression Run in Families?

Studies consistently show depression runs in families, leading some researchers to conclude depression may be genetic in some cases. There is no gene for depression—only various genetic vulnerabilities. Environment also plays a role, both by modeling depression-triggering behaviors and by epigenetic changes. Epigenetic changes alter gene expression, often under the influence of environmental input.

Cancer patients may worry about the role that negative emotions—such as anxiety, anger, and guilt—play in their health. New research suggests these feelings can actually be beneficial. Negative feelings can inspire people to set new goals, which can help counteract the negative health effects of the stress hormone cortisol.