Understanding My Fear of Abandonment 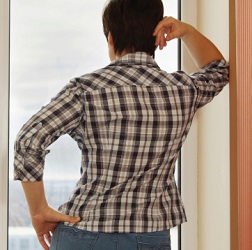 I am a 59-year-old female. Just recently have I come to understand the consequences of being abandoned over and over again while growing up. Sadly, history repeated itself with my own daughter, in a most tragic way.

My dad was a compulsive gambler. Several times a year he would go to work and just not come back home for weeks, sometimes months. I remember this starting at the age of 4 or 5.

Unfortunately, my mom was not the type of person who could conceal her fears, not even for her children’s sake. She would call me into the kitchen and ask me what we were going to do. How are we going to pay the utility bill so the electricity and heat are not turned off? Where are we going to get money for food?

There were five of us children. I was the second child, with a brother one year older, two sisters—six and eight years younger—and another brother nine years younger. I was called “the little mother” and was the most responsible one. At 8 years old, I was left to care for all of them while my mom walked in freezing weather to a church to ask for food. Our electricity and heat would be turned off in the dead of winter.

Through all of this, I still adored my dad, which may seem like a mystery. When he was home, he was emotionally distant. He showed little or no interest in his children’s lives. My mother was emotionally and physically abusive to me, more than the others. When she was angry with him, she was angry with me. She would say I looked too much like him. My personality was too much like his. I was lazy and useless—blah, blah, blah. He did not protect me from her. I internalized all these feelings at a young age. I tried to do better by being the problem solver and the caretaker. It was my responsibility.

When I was 17 I dropped out of school and married to get out of the house. My husband was a nice guy, but we were too young. We had a daughter, and we divorced when she was 4. I moved back in with my parents and obtained a GED. At 22, I met a man two years older and spent the next 14 years living with him. I did not know it in the beginning, but he was an alcoholic and an abuser. That’s when my other nightmare began.

Over the course of the next 14 years, my older brother was sent to prison, my mom died, and my two sisters committed suicide due to major depression. I did not know it at the time, but it was a genetic trait in my family. Looking back, I am sure I suffered from depression and chronic anxiety as well. I had my first panic attack when I was 17. They became more severe and increased in frequency over the years.

By that time I had become a functioning alcoholic. It helped me (or so I thought) cope with the abusive relationship I was in, the losses I had suffered, and my anxious and depressed state. During all this I managed to work full time and maintain a semblance of control. Of course I really had no control. I had no real support system, and I did not confide in my friends, who were also my coworkers. What happened next would completely shatter me.

My daughter was 13 when I found out she was being sexually abused by my live-in boyfriend. I picked up the phone and called an agency. I was put on hold and waited for just a few seconds, I am sure, but it seemed like hours. Then I made the most heartbreaking mistake of my life by hanging up. Four years would go by before my daughter confided in someone, which took it out of my hands. There was a trial and a conviction.

Almost 25 years have gone by since. I cannot even put into words how that split-second moment in time, when I chose to hang up that phone, has forever changed the course of my daughter’s life and my own. My daughter has forgiven me, but I feel I will never forgive myself. Whenever my daughter has difficulties in life, I blame myself.

She experiences bouts of depression and anxiety. Is it because of the stress she went through for most of her childhood, the hereditary factor, or both? I will never know. I feel I have been too lenient with her in the past due to the guilt I carry. She has three daughters now. I hold back from giving advice or opinions on issues regarding my granddaughters. Who am I to advise her after I had failed at one of the most basic tenets of motherhood?

All these years I have tried to reconcile the person I knew myself to be and the person who froze at such a crucial moment, and kept my daughter in an unthinkable situation for an additional four years. All the years of introspection and intermittent therapy with numerous therapists did not help me with the insight as to why I did not protect my child. Until now.

The Realization of Abandonment

I was fortunate enough to talk with someone who has helped me understand this dynamic. In my childhood I was abandoned over and over and over again by my dad. The domestic abuse in the house made me feel my mom would be killed. I would write letters to her and address them to the hospital, fearful that she would be taken there at any given time. The grandmother I loved, who had lived with us at times, died when I was 12. The only time I got a good night’s sleep was when she was there.

Now it is clear to me: The intense fear and panic of being left even by this horribly abusive person was stronger than my ability to protect my daughter. I am still ashamed of it, but I can at least try to come to terms with it. It has been a process of forgiveness and healing. I have been sober for 20 years. I can now honestly say I am not that person who hung up the phone 25 years ago.

If I could send a message to women, it would be this: do not compromise your dignity and integrity by allowing the fear of abandonment to keep you in a situation that is abusive, especially if there are children to consider. The long term consequences are staggering.

If you have been told you cannot make it on your own, do not believe it. There are people you can talk to. Look back at your relationships with men. Did you depend on them for things you could do for yourself? Did you allow them to make all the decisions? Were (are) you clingy? Were breakups excessively painful for you?

There may be something in your past that was a type of abandonment that now influences your judgment. So it was with me.