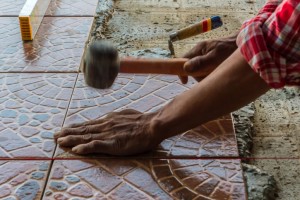 Several years ago, we bought a small summer house. When we moved in, we had to rewire parts of the house, we needed to buy a new water heater, and we needed to add several other improvements and safety features, including banisters for the stairs.

After we bought furniture, decorated, and completed the first big tasks, we slowed down to go swimming, hiking, and bird watching. We enjoyed the forested area; it was quiet, clean smelling, and different than the noisy city where we live during the majority of the year. The basics were in place, and the house learned to play.

I saw my relationship to the house, the woods, and the animals around it like being in therapy. The woods are a great place to feel grounded. A natural meditation for me is feeling, smelling, and hearing the strength and endurance of the trees. The house is like a physical manifestation of the people in it—me, my husband, and visiting children who need special protective features, such as the banisters I mentioned.

We gave ourselves time to feel what the house needed next. I decided I wanted to redo the kitchen floor, which was finished with unattractive vinyl tiles. The kitchen is small; I thought I’d pull up the tiles myself. It seemed easy enough, and what could go wrong? I couldn’t ruin something that was already terrible. My mantra—borrowed from my 3-year-old daughter—is this: “Let’s try. If it works, it works. If it doesn’t work, it doesn’t work.” The house and I were both testing things out and learning what we could do.

First I used a hammer and a screwdriver, inserting the screwdriver between the tiles and the wood floor underneath and prying the tiles up. The first tiles came off easily, but the rest were stuck. I upgraded my screwdriver to another tool I found in the toolbox that had come with the house. The rest of the job with the new tool took several days, but it worked!

My toolbox and my ability to use what’s in it are limited, but when I opened myself up to doing something new and not fearing failure, I found what I needed. I was forming a new relationship with myself and finding new abilities—both continuing processes throughout life.

I went to the hardware store and bought a product that would remove the glue left behind from the tiles. I began my routine: spray the glue to make it soft, scrape it off, and repeat. I worked on the floor steadily; my goal was to finish before the house was closed for the winter.

When I opened myself up to doing something new and not fearing failure, I found what I needed. I was forming a new relationship with myself and finding new abilities—both continuing processes throughout life.It is a pleasure to work slowly, thoroughly, even if it is a grueling task. I worked only when I had the time and the inclination; I was kind to myself. I could have rented an electric sander, but I found the idea of working by hand more appealing. I could have gone after the floor like a mad animal, working day and night, but I chose to work slowly and steadily. The repetitive physical actions became a vehicle for meditation.

I knew I was done sanding when the floor felt soft on my bare feet, and I had ideas about how to finish it. The rest of the house has beautiful mahogany-stained floor boards. The kitchen floor is made with pieces of scratched-up plywood. I would never be able to match the plywood to the mahogany boards, so I decided to stain or paint the boards white.

Fixing the house is an effort to clear away what isn’t needed, find what is needed, and treasure it. It’s like clearing away the stuff in my personality—such as the need to be right or in control—and giving myself permission to experiment, to try new things, and to fail at them. Learning to be all right with failure is an important beginning.

I think my white kitchen floor needs a rug. This winter, I’ll knit one. It may take several tries and starts until I discover the most pleasing pattern, but that’s part of the process.

What is the process?  It’s starting over until you get it right, throwing out what you don’t need, and trying new things.