The Ties That Bind Mothers of Autism Spectrum Children 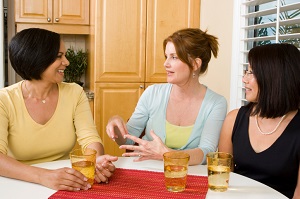 I’ve been organizing and leading therapeutic support groups for mothers of children on the autism spectrum since 2008. During my second semester in graduate school, a series of serendipitous events led to the opportunity to design and lead a group for a local nonprofit organization, and it took off like wildfire. During the past six years, I’ve met hundreds of mothers who have children with varying degrees and severity of autism and related issues.

Often, the children are so different that if you put them all in the same room together, they wouldn’t appear to all have the same condition. But what’s remarkable is that their mothers all have several things in common that extend the limits of ethnicity, race, finances, religious beliefs, and marital status. Often, these mothers would never have been even in the same room together, let alone become a network of support for one another. Despite their differences, I continually see striking similarities among these women. Technically, I don’t think I can call it “research,” but rather “clinical observations” concerning the majority of the mothers who have attended my groups. Here are just a few commonalities I’ve noted based on the data I’ve gathered:

Having a child diagnosed with autism spectrum “disorder” is devastating. Every single one of the moms I’ve met who have attended my groups has substantiated this. You won’t often hear me use such a definitive qualifier as “always” or “in every situation,” but I can honestly say that every woman who has attended my groups has described the experience of her child’s diagnosis as a difficulty that changed her life forever. The process of grieving the loss of a healthy child and learning to live with a “new normal” is one of the greatest challenges these women have had to endure.

Unfortunately this grief cycle does not end with traditional acceptance and closure, as it is not a death in the traditional sense but rather the death of a dream and a relearning about the new circumstances that will change the family forever. It’s cyclical grief and it’s dynamic and changing in nature. Sound a bit dramatic? It’s not. It’s their reality. Autism affects almost every major functioning process of a child: communication, behavior, sleep, health, social interactions, education, and activities of daily living. If that’s not enough, these kiddos are often notorious for unknowingly putting themselves in harm’s way. This makes for a perfect storm of heightened awareness on top of the grief cycle; an exhausting combination, to say the least.

It’s no surprise that mothers of autism spectrum children worry—about the future, what will happen after they die, if their marriage will survive the stress, how this experience will affect their other kids. These are at the top of the list. Most of them worry throughout the day, fearing the dreaded call from school. This is the call that usually starts off, “Ms. Jones, this is Normalville Elementary School calling. Little Jimmy jumped into the retention pond at recess today. He’s fine, but a little wet, and we think it would be best if you picked him up.” (True story, though names have been changed.)

Everyone has experienced being misunderstood, but it seems these moms have more than their fair share. While moms of kids who have issues such as Down syndrome, a physical disability, or a terminal illness seem to receive a great deal of compassion and kindness from others, those of us with autistic children find this area lacking. I overheard one mom say, “When your kid is diagnosed with cancer or your spouse dies, people ask how they can help. But when your kid is diagnosed with autism, no one brings casseroles.”

Judgment is often the alternative. Extended family start telling you that your child needs harsher discipline. Some friends try to help by telling you their kids “do the same thing,” unaware that their attempt to normalize your situation just made it worse. Strangers share disapproving glances and “you’re-a-bad-mom” stares as your 12-year-old child melts down in the supermarket checkout line. Teachers accuse us of being “overly emotional” or “unstable” when we tear up during an individualized education program meeting. It’s rough.

Bravery, Courage, and a Sense of Humor

Before readers accuse me of being too negative, let me end on a positive note. In all of the data and information I have collected over the past six years, I have consistently seen that autism moms have a remarkable level of courage. And they can laugh—at themselves, at their situation, and at the ridiculousness that accompanies parenting a child on the spectrum. Now, keep in mind that my data are skewed a bit, as my sample is all autism moms who have attended my support groups. This means these moms in particular know they need a little help, admit it, are willing to make time for their own self-care, and commit to the group process. As John Wayne said, they “are afraid, but saddle up anyway.” They make courage a daily practice, and they live researcher Brené Brown’s statement that “courage starts with showing up and letting ourselves be seen.”

Considering the upstream swim they endure, their courage, sense of humor, and connection with others in the group helps keep their heads above water when they feel like giving up. As a group leader and fellow autism mommy, I find that they often inspire and strengthen my own resolve to “just keep swimming.”