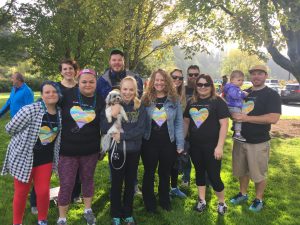 On Saturday, September 24, GoodTherapy.org team members gathered to participate in the 2016 Out of the Darkness walk for suicide awareness in Olympia, Washington. GoodTherapy.org helped sponsor the event, organized by local representatives of the American Foundation for Suicide Prevention (AFSP), and solicited donations to the cause.

This is the third year in a row GoodTherapy.org team members have participated in the walk, which starts in Olympia’s Marathon Park and circles Capitol Lake. Olympia is home to GoodTherapy.org’s regional offices and provides a beautiful setting for the walk and accompanying ceremony.

AFSP’s Out of the Darkness walks raise money for suicide awareness and prevention all over the country. With more than 350 events in 2016, Out of the Darkness walks are AFSP’s largest fundraiser, producing millions of dollars. This money goes toward suicide prevention programs, research about suicide, and educational projects. It also enables AFSP to better support survivors of suicide loss and advocate for legislation and public policy that can help reduce suicide rates.

More than 352 people participated in the Olympia Out of the Darkness walk, and participants raised over $25,000 in donations to AFSP—$4,000 more than the 2015 total. This year, the GoodTherapy.org team set a fundraising goal of $1,000. We are thrilled to report we exceeded our goal by more than $500! Fundraising efforts continue until the end of 2016; if you would like to make a donation to AFSP via the GoodTherapy.org team, you may do so through our Out of the Darkness team page.

Suicide numbers are too high to ignore. As an organization dedicated to raising awareness of mental health issues and helping all people get the care they need and deserve, GoodTherapy.org strives to recognize community efforts to educate about mental health and reduce the stigma attached to seeking help. Change happens at the local level; Out of the Darkness walks happening all over the United States are proof that we are not alone in advocating for mental health awareness and support for those living with depression, people who have experienced a loss to suicide, and anyone who has a loved one with mental health issues.

We were honored to participate in this worthy cause for the third year and make a contribution to the admirable efforts of the American Foundation for Suicide Prevention organization in Washington state, as well as all over the country. Click the video to watch Eileen Bochsler, chairperson for the Olympia Out of Darkness Walk, speak about strides in suicide research, prevention efforts in the state of Washington, and the importance of community involvement in raising awareness about suicide.