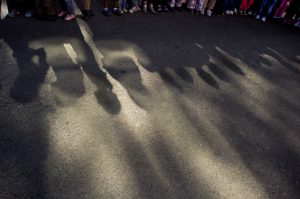 Six years of fighting in Syria have exposed a generation to horrific violence. “Invisible Wounds,” a new report from Save the Children, highlights the immense mental health toll of the constant trauma Syrian children face. According to the report, 3 million Syrian children under the age of 6 have spent their entire lives in a war zone. Two million children have fled the country as refugees to face an uncertain future. Of the children who remain in Syria, at least 25% are at risk of developing a mental health condition.

Two-thirds of Syrian children interviewed for the report had lost a loved one. Nearly half of adults said they had seen their children lose the ability to speak in response to trauma. Eighty percent reported more aggression among children and young adults, and 71% said children increasingly experienced nighttime bedwetting, a common symptom of posttraumatic stress (PTSD).

Syrian children exposed to violence, anxiety, and loss may experience a range of symptoms, including depression, PTSD, and suicidal thoughts. Some respond to violence by becoming violent themselves. Fifty-nine percent of adults interviewed for the report knew of children recruited into armed groups. Some respondents reported having limited access to only one psychiatrist within regions of more than 1 million people. One in four children said they did not feel they had anyone to talk to or access to a safe place to go when they felt upset or scared.

Before the war, nearly 100% of Syrian children were enrolled in school and literacy rates were close to 95%. About a third of school-aged Syrian children are now not attending school and many more are at risk of dropping out, suggesting even if the war ends, the future looks bleak for Syria’s children.

Vision impairments elevate the risk of depression, especially for aging adults, but occupational therapy for this population could reduce the risk. In a new study, researchers found people with age-related macular degeneration who experienced occupational therapy-related improvements in daily functioning had better mental health.

Teenagers Do Dumb Things, But There Are Ways to Limit Recklessness

Developing brains and immaturity may lead teenagers to make impulsive and sometimes reckless decisions. An international study of more than 5,000 adolescents determined that teens have similarly risk-prone brains, but that risk-taking behaviors vary across cultures. According to the study, cultural norms and expectations can constrain teens’ tendency to take risks.

Three myths may color the debate about transgender bathroom use. There is no supporting evidence to back up the idea that nondiscrimination policies for public bathrooms would lead to an increase in attacks in those facilities. Scientific and sociological research also undermines the false claim that being transgender is a temporary condition rather than a valid state of being. Finally, the belief that allowing children to express their gender identity is harmful is similarly undermined by research showing the denial of a child’s true gender is the real source of harm and can lead to gender dysphoria and suicide.

Why We Can’t Look Away From Our Screens

In Irresistible: The Rise of Addictive Technology and the Business of Keeping Us Hooked, social psychologist Adam Alter suggests reliance on digital devices is becoming harmful and potentially addictive. An addiction to digital devices can produce similar brain changes to those of a drug addiction, producing similarly negative effects—troubled relationships, distractions at work, and even financial woes.

The Dark Psychology of Dehumanization, Explained

Dehumanization allows people to see others as less than fully human, and therefore less worthy of decent treatment. As anti-Muslim rhetoric increases, so too does the tendency to dehumanize Muslims and other ethnic minorities. This emboldens those who wish to mistreat or oppress minority groups, and allows even those who oppose such mistreatment to look away.