Support from Dads Might Offset Effects of Maternal Depression 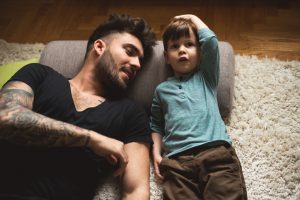 Children raised by parents with depression may experience a range of challenges, including delays in social and cognitive development, an increased risk of some mental health conditions, and behavioral issues. Dads may have a role in helping children overcome these difficulties. According to a new study published in the journal Development and Psychopathology, dads can offset some of the effects of maternal depression.

The study followed married or cohabiting couples in which the mother had chronic depression. Researchers screened each mother for depression in the year following birth and again when the child was 6 years old. They also visited and taped families when the child was in preschool. The visits screened for sensitivity—the ability to respond appropriately to the child’s needs. They also screened for intrusiveness, which the study defines as the tendency to disregard the needs of the child or take over tasks the child could perform on their own.

Depressed mothers and their partners were less sensitive and more intrusive. This resulted in children with lower levels of social engagement. The partners of women with depression did not frequently engage with their children, producing a less cohesive and harmonious family. In this regard, maternal depression—and the partner behavior that accompanies it—predicted family problems.

Among fathers who were engaging, sensitive, and nonintrusive, maternal depression was no longer a predictor for a less cohesive family. The study points to the importance of fathers in child welfare and overall family well-being, particularly when mothers are not as well-equipped to meet children’s needs.