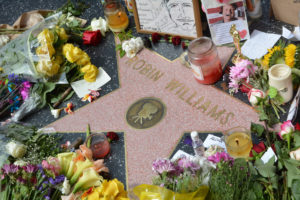 Researchers have documented a nationwide spike in suicides following the 2014 death of actor Robin Williams. The study, published in PLOS ONE, found that in the five months following Williams’ death, suicides were 10% more frequent than suicide trends would predict.

Researchers have long expressed concern about a contagion effect associated with high-profile suicides. This study suggests that suicide may indeed be “contagious.”

A Suicide Contagion Effect Following the Death of Robin Williams

Williams died by suicide on August 11th, 2014. To assess the effects of his death, researchers gathered monthly suicide data in the U.S. from the Centers for Disease Control and Prevention Wide-Ranging Online Data for Epidemiologic Research (CDC WONDER). The data included suicides occurring between 1999-2015.

From this data, they constructed an expected monthly suicide tally. Suicide rates vary seasonally, so the analysis took the time of year into account. The analysis predicted 16,849 suicides in the five months following Williams’ death. Instead, the analysis counted 18,690 suicides in that period—1,841 more than expected. This suggests a suicide rate increase of about 10%.

Suicide rates increased the most among men and people ages 30-44. Many of the suicides mirrored the method of Williams’ death.

Guidelines for journalists covering suicide highlight the need to avoid sensationalized reporting and specific details. Both are correlated with a contagion effect. The finding that suicide increased following the death of Williams highlights the need for more sensitive coverage of suicide.

Suicide is preventable. The right kind of support can help. People with suicidal thoughts may need therapy, support from loved ones, or medication to manage their emotions.

To get help with suicidal thoughts or to help someone you love, contact the National Suicide Prevention Lifeline at 1-800-273-8255.