Study Suggests Reptiles, Too, Can Learn Through Imitation 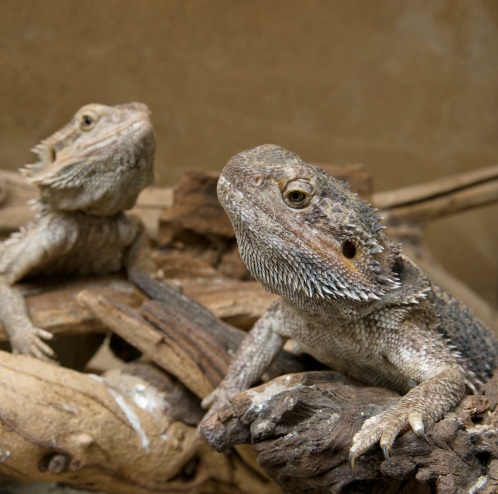 For centuries, scientists thought that learning through imitation was unique to humans, only to have this assumption upended by studies in primate learning. Until recently, scientists believed that only humans and non-human primates could learn by watching others. A new study from the University of Lincoln endeavors to undermine this presumption with preliminary evidence that reptiles may be capable of learning through imitation.

Can Reptiles Imitate Others?

To evaluate reptiles’ ability to imitate others, researchers looked at 12 bearded dragons. This spiny, medium-sized lizard is a popular pet, with some bearded dragon owners insisting that their lizards are capable of learning complex tasks or imitating others.

Researchers trained one lizard to serve as a demonstrator. “Demonstrators” used their feet to open a wire door and uncover a hole in a board. Lizards who successfully completed the task got a food reward on the other side of the door. The experimental group watched the demonstrator lizard perform the task, while the control group had to perform the task without first seeing another lizard do it. Of the eight lizards who saw another lizard demonstrate the task, all were able to successfully complete the task themselves. None of the control lizards were able to complete the task, providing powerful evidence that the experimental group learned through observation and imitation.

It might seem obvious that a lizard who sees another lizard complete a task will be more likely to successfully complete the task, but imitation is not a given in the animal world. Scientists have long used imitation as a way to judge intelligence. This latest round of research suggests that, rather than being a recent evolutionary development found only in primates, imitation could be widespread among animals, suggesting imitation arose earlier in evolutionary history than previously thought.

Reptiles are sometimes regarded as rather unintelligent, but this study backs up the anecdotal claims of reptile owners who insist that their pets are more complex than they appear.