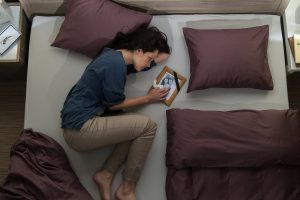 The death of a partner can be damaging to the mental and physical health of the survivor. Though previous research shows about 60% of people who lose a spouse have enough resilience to move forward and be satisfied with their lives, a new study suggests a majority of bereaved spouses may not be receiving the support they need.

According to the study, the traditional methods for evaluating readjustment following the death of a spouse fail to account for the many ways in which lives are impacted by the event. Mood, motivation, social behaviors, and sleeping habits are just a few of the areas of life that may suffer after loss.

Most evaluations of well-being after spousal loss only include self-reports of life satisfaction as the key measure, with symptoms of depression sometimes being monitored as well. But while many people report being satisfied with their lives, they may have difficulty in other areas that can affect overall quality of life.

The authors of this new study designed their experiment to identify the other factors that may help to understand the multidimensional nature of resilience.

Expanding the Definition of Resilience

Published online by the Journal of Personality and Social Psychology, this experiment took advantage of a database of information that was originally obtained in the Household Income and Labour Dynamics of Australia Study. In total, the researchers examined 13 consecutive years of responses from 421 people who had lost a spouse. Mathematical modeling was used to evaluate resilience by measuring life satisfaction along with emotional affect, general health, and physical functioning. The strongest predicting factors of positive resilience were also identified.

As measured by the traditional life-satisfaction variable, 66% of respondents reported positive resilience after the death of a spouse. When resilience was measured by changes in emotional tendencies, the findings showed only 19% eventually recovered from experiencing increased negative affect and just 26% reported a return to pre-loss levels of positive emotions.

Similarly, measures of resilience based on general health (37%) and physical functioning (28%) were significantly lower than the life-satisfaction result. The strongest predictors of positive recovery were the continuation of regular social interactions and feeling like a strong support system (family, friends, professionals) was available. The findings suggest a multidimensional approach to evaluating resilience after spousal death could be a better alternative to traditional measures.

Another recent study describes resilience after spousal death as a form of psychological adaptation that is reliant upon multiple factors. While the experiment focused on older people (ages 60-89) and would need additional data to evaluate other age groups, these findings also suggested recovery was related to several influences, including marital status, gender, and resilience as a personality trait.