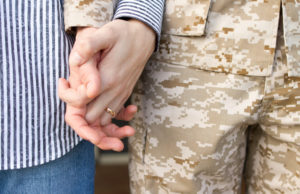 Married veterans and those who live with a partner face a greater risk of suicide than single veterans, according to research published in Archives of Suicide Research. The study, which was designed to assess the effects of religious feelings on veterans’ suicide risk, also found a correlation between negative attitudes toward God or religion and risk of suicide.

Many veterans experience trauma while deployed. Veterans can also face significant stress when they return to civilian life. Veterans have higher rates of suicide and suicidal thoughts than people who have never served in the military.

The study found 20% of participants had experienced suicidal thoughts, with 6% reporting a past suicide attempt and current thoughts of suicide.

The study included 772 recently returned veterans who participated tin the Survey of Experiences of Returning Veterans (SERV). SERV is a long-term study of veterans by the U.S. Department of Veterans Affairs (VA).

Due to a recruiting campaign, over 40% of participants were women—more than double the female representation in the military. Suicidal thoughts and actions were more common among female veterans. Previous research suggests military women have high rates of trauma. A 2015 study found two in five military women experience sexual harassment during their service, as opposed to 4% of men.

The average age of participants was 35. Veterans in their 20s were less likely to report suicidal thoughts than those in their 40s or 50s. In a press release, Crystal Park, one of the study’s co-authors, noted many older veterans were members of the National Guard. They may not have expected to be deployed.

The study found more suicidal thoughts and gestures among veterans who lived with or were married to a partner. Park said this may be due to the added pressures of sustaining a relationship.

Some participants had negative religious or spiritual attitudes. They felt punished or abandoned by God. These attitudes were linked to a higher suicide risk, even when researchers controlled for depression and other factors linked to suicide. Positive religious feelings—the notion that God is a source of support, for example—did not have a significant impact on the risk of suicide.

Suicide is a preventable tragedy, and suicidal thoughts are treatable. Veterans experiencing a mental health crisis are urged to call the Veterans Crisis Line by dialing 1-800-273-8255 and pressing 1. The VA publishes a number of online suicide prevention and education resources for veterans and their families.