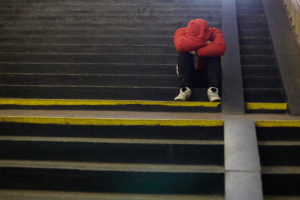 According to the National Institute of Mental Health, about 6.8% of Americans experience posttraumatic stress (PTSD) during their lives. In a 2013 study published in the Journal of Traumatic Stress, 89% of respondents had experienced at least one traumatic event. However, only 50% met the criteria for PTSD. So while trauma is a prerequisite to developing PTSD, it’s not the only factor.

A new study in Translational Psychiatry suggests chronic stress in adolescence could increase the risk of developing PTSD later on. The study says stress elevates ghrelin levels long after the stressful event is over.

Ghrelin is a hormone that controls appetite and inhibits fear in unstressed people. High exposure to ghrelin can cause a person to become resistant to the hormone’s effects. This could prime people to later develop PTSD.

A Link Between PTSD and Ghrelin Levels in Rats

The study included a rat model of stress to test theories about stress hormone levels in humans. Researchers began by daily handling a group of rats each day for two weeks. They immobilized a second group of rats inside cages each day during the same two weeks. Restraint is stressful for rats, so researchers hoped the effects of this immobilization would mimic the effects of stress in humans.

Researchers found ghrelin levels were higher in the second group 24 hours after the stressful experience. The rats who were restrained also had elevated ghrelin levels 130 days later. The study’s authors say 130 days for rats is equivalent to 12 years for humans.

Researchers repeated this protocol with two additional groups of rats. The control group was handled for two weeks, while the second group was restrained. Fourteen days later, researchers shocked the foot of each rat following a sound. The rats learned to associate pain with the sound. This conditioned fear response caused rats to freeze in anticipation of pain once they heard the sound.

Then the researchers played the sound without the shock. Compared to the control group, the rats who had been restrained froze longer during the sound. This suggests stress may prime the brain to react differently to later traumas. This priming can last long after the stressful experience itself.

Ghrelin, Stress, and PTSD in Humans

Animal studies have long been used to model human health and behavior. Yet due to species differences, rat studies are not guaranteed to predict results in humans. To directly test ghrelin levels in people, researchers needed a different method of analysis.

Researchers worked with 88 children from Pakistan’s Khyber Pukhtunkhwa. The region has been plagued by more than a decade of conflict and terrorism. The children were an average of 14 years old at the time of the study. Each had experienced a trauma such as an injury or the loss of a family member. Researchers compared these children to kids who had not experienced similar trauma.

Investigators tested the children’s blood ghrelin levels. Children affected by trauma had ghrelin levels about twice that of children who had not experienced trauma. The traumatic events had occurred an average of four years before the study. This timeline suggests that, just like in rats, children may have elevated ghrelin levels long after a trauma.

This ghrelin-stress connection may also have affected children’s body mass index (BMI). All of the children in the study had BMIs classified as “normal.” Yet trauma-exposed children had lower BMIs overall.

Taken together, these trials point to a complex interaction between early stress, appetite, and later risk for posttraumatic stress.

If you or a loved one is experiencing PTSD, you can find a therapist here.