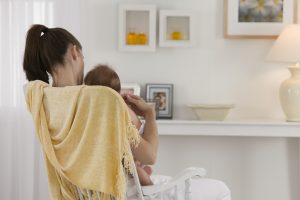 Although breastfeeding is widely accepted as the healthiest choice for infants, significant disparities in breastfeeding persist. Poverty, educational levels, and breastfeeding initiation in the hospital may help explain which women initiate breastfeeding with newborn babies and which don’t, according to a study published in Pediatrics.

Why Some Mothers May Not Initiate Breastfeeding

For the study, researchers analyzed data on 1,636 mother-child pairs who participated in the Community and Child Health Network study, assessing intent to breastfeed after birth and following up one and six months after birth. Participants delivered babies at hospitals in Los Angeles, California; Washington, D.C.; Baltimore, Maryland; and Lake County, Illinois.

According to study results, mothers who had received more education were more likely to breastfeed, and high levels of poverty reduced the likelihood that a woman would breastfeed. The study also revealed that family history played a critical role. Hispanic women were far more likely than white or black women to have a relative who breastfed, and this previous exposure increased the likelihood that these women would breastfeed their own babies. This, the study’s authors note, is an important data point, since Hispanic women are often similarly situated to black women both socioeconomically and educationally.

The American Academy of Pediatrics supports breast milk as the normal diet for human babies and advises mothers to exclusively breastfeed their babies, offering no other food or liquids, until about six months. Thereafter, the AAP advises mothers to continue breastfeeding until the baby is at least one year old, while gradually introducing solid foods. The organization recommends nursing newborns on demand—usually eight to 12 times per day.

Only about half of all American children are still receiving breast milk at six months, though research consistently shows that breast milk provides a number of benefits to infants. Breastfeeding is recommended by the AAP whenever possible.

Benefits of breast milk include: