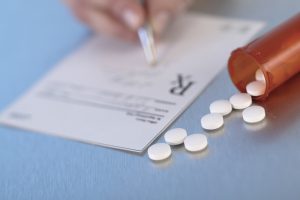 Opioid-related deaths reached a record high in 2014. Of more than 47,000 total drug overdose deaths that year, opioids were involved in nearly 29,000.

Opioid Use Among Those with Mental Health Issues

The study looked at 10.3 million patients who filed claims for opioid prescriptions between 2004 and 2013. Investigators then looked for a prior history of mental health and behavioral conditions such as substance abuse, suicide attempts, depression, anxiety, self-injury, and sleep issues. They also tracked previous use of psychoactive drugs such as stimulants, antidepressants, and antipsychotics.

About 1.7% of people who took opioids used the drugs for six months or longer. A history of psychoactive drug use or mental health conditions correlated with increased rates of long-term opioid use. Among people with a previous history of opioid abuse, the risk was nine times as high as controls, while people taking medication for attention-deficit hyperactivity (ADHD) saw an increased risk of about 1.5.

Reducing the Risk of Opioid Abuse

The study’s authors suggest knowing who is at a heightened risk of opioid abuse can help physicians screen their patients and choose appropriate medications.

The Centers for Disease Control and Prevention (CDC) recommends physicians use non-opioid therapies whenever possible, monitor opioid prescription use, and start with low doses, slowly increasing the dosage as necessary.