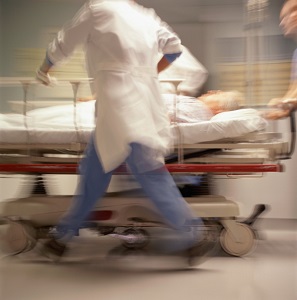 In a time of health crisis, the ingrained response is to rush to the hospital and seek help or treatment in the hope that the medical professionals on staff will be able to resolve whatever issue is at hand. In many cases, lives are saved and problems are solved. But the services rendered often come at a heavy price.

In their annual report on U.S. hospital prices for 2013, National Nurses United revealed that not only have hospital charges been increasing steadily for the past 20 years, but some are charging patients over 10 times the standard cost of a treatment, as well. Specifically, 14 hospitals were found to bill patients over $1,000 for every $100 of their actual costs, according to an ABCNews.com report on the issue (Lupkin, 2014).

This typically leaves people in massive amounts of debt following their hospital stays, regardless of whether they have health insurance. This forces many—approximately 56 million Americans between the ages of 19 to 64—into seemingly endless financial black holes.

Alarming numbers of people declare bankruptcy because they simply cannot afford to pay their medical bills. In fact, unpaid medical bills account for the majority of bankruptcy filings in the United States (LaMontagne, 2013).

The unfortunate results of the exorbitant price tags attached to hospital care lead a large number of people to refrain from seeking out and receiving the treatments they need in order to heal and recover. Joan Ross, co-president of National Nurses United, told ABCNews.com that in her experience, she has witnessed patients turn down otherwise life-saving procedures to avoid burdening themselves and family members with excessive costs.

“Decisions are not made by what is best for the patients,” she said. “They’re made on what costs the least and what they can afford” (Lupkin, 2014).

In an official statement to ABCNews.com, the nurses’ organization declared that the hospital bills heaped on patients are reflective of “a broken payment system.”

With hospital care driving millions into financial ruin and a national union of nurses stating that the system is broken, it is widely agreed upon that massive changes are necessary. The Affordable Care Act is the current administration’s attempt at improving access to care; however, change takes time and as it is unfolding, there remain many in need of care who may not receive it.

Unfortunately, in the case of a medical emergency, there are no alternatives to traditional hospital care; the emergency room is likely the only option for intervention and treatment. When it comes to addressing mental health issues that require intensive care, however, alternative forms of treatment are already being explored in some parts of the country.

‘The Living Room’ Offered in Chicago Suburb as an ER Alternative

Crippling costs aside, the emotional distress associated with a severe bout of psychological breakdown often requires care beyond what a hospital ER setting can provide. In light of this, researchers at the DePaul University School of Nursing examined the effects of “an alternative, recovery-oriented, homelike environment” on people experiencing extreme emotional distress and other mental health-related issues (2014).

This alternative crisis intervention center, called The Living Room, is an outpatient, voluntary program run by Turning Point Behavioral Health Care Center in Skokie, a suburb of Chicago, Illinois. Funded by the Illinois Department of Mental Health, the treatment center is furnished and decorated to look like someone’s living room and is staffed with a licensed mental health professionals, registered nurses, and trained peer counselors who have endured their own bouts of emotional and psychological unrest.

To assess the effectiveness of this homey and empathetic environment in dealing with mental health crises, the DePaul University researchers examined the experiences of 18 people who had previously visited hospital emergency rooms and have since made use of The Living Room in their times of need.

Their findings revealed that not only do emergency rooms have a tendency to provoke feelings of “insecurity, loneliness, intimidation, fear, and discomfort” in emotionally and psychologically distressed individuals; they also leave people in these troubled states feeling largely unsupported by hospital staff.

In contrast, the researchers discovered that those treated in The Living Room felt helped and cared for, and that they left feeling better able to handle their issues, which ranged from symptoms of depression to those of Asperger’s syndrome. The interventions employed by the staff included “being understanding, attentive, and respectful” as well as speaking in calm, gentle tones and exploring a variety of individualized coping mechanisms. Apparently, even in times of extreme distress, the simple act of listening—allowing those in need to talk through their issues and helping them to see the positive aspects of negative situations in life—works.

While the notion that active listening and displays of empathy have the potential to heal has been touted for years by many in the mental health field, the authors of ‘The Living Room’ study note that very few alternative treatment centers exist that draw on the immense healing capacity of human empathy and understanding.

The hope is that moving forward, more of these facilities will be established and made accessible and affordable to the public.