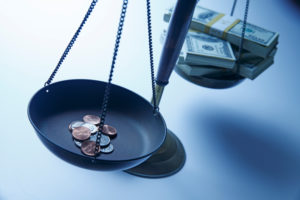 The way a person’s brain reacts to inequity may correlate with the risk of later depression, according to a study published in Nature Human Behavior. The study used a video game with high levels of unfairness to link prosocial attitudes to an increased risk of depression.

According to the study, some research suggests that increases in economic inequality are associated with an increase in depression rates.

For the study, researchers asked 343 participants to play a video game. Before the game, they assessed each participant’s social value orientation, a measure of the person’s views about economic inequity.

Investigators hooked participants up to a functional magnetic resonance imaging (fMRI) machine. An fMRI machine measures blood flow to the brain during the performance of specific tasks, potentially revealing information about how the brain processes the task. Previous research has revealed those who are prosocial show more activity in the amygdala in response to perceived inequality.

While attached to the fMRI machine, participants played a game dubbed the ultimatum game. The game, which is designed to recreate economic inequality, presents participants with offers that either maximize or minimize inequality. During the game, some participants showed more activity in the amygdala and hippocampus. These brain regions are associated with processing emotion, and some research suggests they are smaller in people with depression.

A year later, researchers again assessed participants’ depression levels. Those who had demonstrated higher activity levels in the amygdala and hippocampus during the game were more likely to be experiencing depression.

Is There a Link Between Empathy and Depression?

The game is one way to measure empathy, as it assesses how a person reacts to perceived unfairness. More brain activity in the amygdala and hippocampus during the game suggests a stronger reaction to inequity. This, the authors of the study believe, may mean people are more likely to become depressed when they hold prosocial values that induce a strong reaction to inequity.

This association between prosocial attitudes and depression persisted even when researchers controlled for income and other demographic factors that correlate with depression risk.