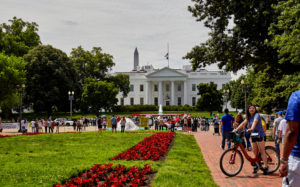 Americans are the most stressed they have been since the birth of the American Psychological Association’s (APA) “Stress in America” survey. The annual survey began in 2007. This year’s survey suggests Americans across political affiliations feel concerned about the future of the nation, money, and work.

Americans: More Stressed Than Ever

The survey asked participants to rank their stress levels on a scale of 1-10. As with previous years, it found a gender and racial gap. Women reported higher stress levels than men, and their overall stress level rose slightly, from 5.0 in 2016 to 5.1 in 2017. Men’s stress levels dropped.

The Effects of Political Stress on Mental Health

The nation’s political climate figured prominently in respondents’ stress levels, with the future of the nation being the most frequently cited source of stress at 63%. Sixty-two percent of respondents worried about money, and 61% worried about work. Fifty-nine percent said this is the lowest point of U.S. history they can remember. This figure includes people who survived other difficult times in history, including World War II and the Vietnam War.

Political divisions are a significant source of stress, with 59% of respondents citing divisiveness as an issue. Democrats (73%) were more likely than Republicans (56%) and independents (59%) to say they worry about the future of the country. The political issues people most frequently reported worrying about included:

Most respondents (95%) reported following the news, but 56% said that doing so causes them stress.

Political Stress as a Source of Inspiration

Though the survey paints a grim picture of Americans’ mental health and hope for the future, it also uncovered a commitment to improving the nation. Fifty-one percent said that concerns about the nation inspired them to support various causes or volunteer, and 59% percent reported taking action in the last year, such as by signing a petition or boycotting a company.

The APA cautions that it cannot estimate the role of sampling or theoretical errors, since the survey is based on the voluntary participation of people invited to answer poll questions.