Starting with Yes: Cultivating the Positive in Relationships 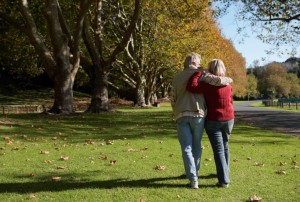 You’re upset with your partner; your emotional brain is fired up, and you offload a criticism. In your mind, you’re just trying to communicate your feelings and help your partner do better. In their mind, they’re under attack. The amygdala is registering danger, and they are poised for fight or flight. Let’s say your partner flees: They withdraw, slamming the door for good measure. And as they leave, they spit out, “You’re never satisfied!” Now your amygdala is on fire; you feel abandoned and unheard. The two of you are caught in a “dance of amygdalas,” each of you taken over by your emotional brain.

A Scene from a Marriage

Do you recognize the scenario above? I certainly do.

I may have the most benign motive in “sharing” with my husband how he could do better, thinking I’ll be improving our marriage, but it rarely leads to good things when I start this way. Once, as we were driving to a concert and had a good 45 minutes ahead of us, I thought, This is a great time to bring up a frustration I’ve been feeling in the last week. We are alone, together, in a quiet space, and I have his attention. We will get closer if I share my feelings with him. So I raised my concern, in a calm way (or so I thought). He asked why I was ruining a perfectly lovely evening by criticizing him as soon as we got in the car.

Later, as we deconstructed our fight, he told me he felt trapped in the car, with no exit as I unloaded my criticism. What seemed to me like a lovely opportunity—we were alone in the car—felt to him like a trap.

This scene is more likely if we have been critical or crabby with each other in recent times. If we are awash in positive emotions and great connection, with mutual admiration, raising a concern in a constructive way is less likely to elicit a defensive reaction. But if we’ve been caught up in a loop of mutual criticism and defensiveness, raising a topic of concern can seem like one more attack.

John Gottman, in his longitudinal research on happy and unhappy couples, found that happy couples are more positive and friendly with each other. They have a 5-to-1 ratio of positive to negative interactions. That’s why if my criticism comes in the context of love and admiration, it’s less likely to wound my husband. If there’s been a lot of negativity lately, he’s more likely to feel attacked. And we may get caught up in a cycle of negativity. The human brain is biased toward the negative; the amygdala is constantly trying to sniff out trouble, to protect us so we can survive. What felt to me like an opportunity for a conversation that would make us closer felt to my husband like danger.

Then there’s the gender issue: although not always the case, women tend to be the complainers in heterosexual relationships. When a woman tries to improve her man—even in the nicest way—he may have conscious or unconscious flashbacks of his mother being on his case as he was growing up, and the sense of powerlessness he felt as a boy when she tried to shape his behavior. He might especially get reactive with his wife if his mother was highly critical. The last thing he wants is to be in that powerless position again. So he may tune her out, stomp out of the room, or lash back in anger. All of these responses may aggravate his wife, who now feels silenced and disconnected.

Happy couples proactively nurture the positive in their relationships. They go out of their way to notice, admire, and care for each other. They don’t fall victim to knee-jerk reactivity that leads to an impasse of “nasty-nasty” interchanges, as Gottman puts it. In happy heterosexual couples, the woman raises her concerns with a “soft startup.” That means she doesn’t launch into her criticism-du-jour in a thoughtless way, but rather softens her communication, conveying her thoughts in a loving way. In my experience, it matters how both partners raise their concerns: Whether you’re a man or a woman, voicing your issues constructively and nurturing the positive is key.

Because of our instinct for self-defense and self-preservation, when we hear a criticism or feel attacked, we may automatically stiffen up and circle the wagons. When we feel our partner’s love and concern, we relax and want to connect.

Here’s how it works in practice: Let’s say you’re a husband, feeling upset about the fact you haven’t had much quality time with your wife in the past week; you’ve both been busy, and you are feeling particularly neglected. One way to raise your concern is direct, unfiltered, and hostile: “You’re never around! I can’t believe you’re so devoted to work and totally absent at home!” This isn’t the worst way to say it—you could have thrown in, “You’re such a narcissistic workaholic! All you care about is yourself and your stupid job!” But let’s say you don’t go down that inflammatory path. You stick to the point without throwing contempt into the mix. (Gottman found contempt to be particularly toxic in marriage.)

The unfiltered, intense version of the message, even though it doesn’t convey contempt, is not likely to succeed. Your partner is likely to get defensive, and perhaps to feel that at work no one makes her feel so small and unappreciated.

Now let’s try a different version, one that is based in love and admiration. Here’s how it might go: “Honey, I miss you lately. You’ve been working late hours, and we haven’t had much time together. I know this is a stressful time at work, but let’s not lose track of each other. Can we find some time to take a walk later today?” This version is inviting, not attacking. Your partner is less likely to get reactive, and she is probably going to feel loved (you want to spend more time with her) and cared for (you are aware of her stress at work). Rather than having to defend herself, she may come forward and problem-solve with you about how to carve out more time together.

Because of our instinct for self-defense and self-preservation, when we hear a criticism or feel attacked, we may automatically stiffen up and circle the wagons. When we feel our partner’s love and concern, we relax and want to connect.

The burden isn’t only on the initiator of the conversation, although that’s important. How we receive our partner’s communication is equally important. Let’s say your partner isn’t on her best game, and comes across critical or irritated with you. You could say, “Who would want to talk with you? You’re so mean!” This is not likely to lead anywhere good.

Think about what would happen if instead you said, “I really want to hear you, and I can see you’re upset—but the way you’re talking to me is putting me off. Please try to tell me what you want in a gentler way so I can hear you.” This sentence essentially starts with a yes, not a no. Rather than defending yourself against her, you are engaging with her. You are setting limits—no one wants to be dealt with in a hostile, abusive tone—but you are also communicating love and care. You are disarming her with positivity.

When we feel criticized or attacked, our amygdala sets off the fight-or-flight response. This can save our life on a hike if we see a rattlesnake. The problem is, our emotional brain doesn’t differentiate between poisonous rattlesnakes and cranky spouses. To the amygdala, danger is danger. So when you defend yourself against your partner, it’s your lower brain that’s in charge. And your response threatens her; now she gets reactive. When you take a breath and remember that this is your beloved who is struggling and stressed, not your enemy, you might be able to make a better choice. When you can reach out to her with a yes, and tell her you want to hear her if she can speak more gently, she is likely to relax and feel relieved that you are there for her. Starting with yes makes her feel you care, and the shift in her mood may be dramatic.

It Takes Two to Tango: Vicious Cycles or Virtuous Cycles

It’s so easy to get caught up in a cycle of negativity as each of us inflames the other. When both partners are reactive, little good happens. But just as we can get caught up in vicious cycles, we can also create virtuous cycles: One person’s yes encourages the other’s yes. Psychologists studying couple relationships focus not just on how we manage the negative in marriage, but also on how we cultivate the positive.

Barbara Fredrickson, a positivity researcher, has a new take on love: Love is built through “micro-moments of positivity resonance.” The many little moments in which couples connect positively with each other strengthen their bond. Gottman calls this “turning toward” each other—and happy couples do this a lot. Nurturing the positive allows us to not be victims of our fight-or-flight instincts, but rather to choose with our higher brain how we want to act with our partner. Being thoughtful and nurturing the positive helps us to create and maintain relationships that thrive over time.

The next time you communicate with your partner, think about whether you want to create a yes relationship or fall into the reactive habits of no. And if you need help coming up with effective communication strategies, contact a therapist.