Bullying in the Culture of Sport Coaching, Part I 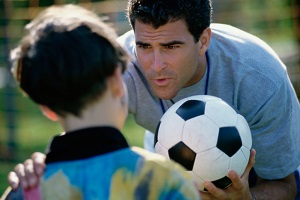 There is a lot of attention being paid to bullying. I see many bullying prevention programs in media reports, research studies, and in efforts in various places to prevent and reduce the action of bullying. I also see frequent headlines about inappropriate abusive coaching tactics. Bullying seems to be accepted, or even expected, as status quo when perpetrated by sport coaches. Many coaches act like bullies and people seem to write it off as something that coaches are supposed to do, and even something that helps performance. Somehow people think that if a coach makes an athlete angry, the athlete will play better or more intensely. This has the potential for negative consequences and, more importantly, is a myth.

“Sport psychology research shows that anger does not enhance performance; neither is sport participation a convenient outlet for it. But many coaches and athletes believe that angry players intimidate others and play better. Once anger is generated in competition, no one seems to know the best ways to control and diffuse it during and after the game” (Murphy, 2005). When players get angry, there is likelihood for more mistakes in play, more penalties, and arousal levels that detract from performance. Practice makes improvement. We know that practicing techniques for sport leads to improvement. Let’s expect coaches to practice being good coaches. Let’s expect both coaches and players to practice managing emotions. Role playing how to manage emotions is effective. If we can do drills for free throws, we can do drills for managing emotions. It just takes practice.

The culture of sport coaching needs some work. Our expectations of coaches and our understanding of what is effective in terms of helping athletes perform at their best can be improved. Behaviors such as yelling, insulting, and displays of anger do not help performance, and could be considered lack of control of emotions. This seems to be part of the culture of sport coaching.

As parents of youth playing sports, what can you do to make a difference in the culture of sport coaching?

Remember that youth sport is a platform for learning and fun. If adults involved in the sport culture act like bullies, use inappropriate means to motivate, harm children in subtle or explicit ways, or are involved for reasons other than youth development and bringing out the best in the athletes they serve, then parents and observers have a responsibility to act. Coaches have power, but so do you.