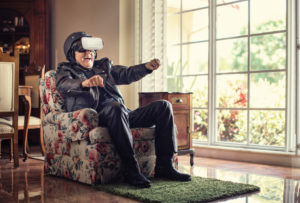 Dementia is a chronic syndrome that causes a person’s cognitive ability to decline. As of 2015, 47 million people across the globe live with dementia. The World Health Organization estimates that 75 million people worldwide will have dementia by 2030.

Brain exercises that focus on speed processing (but not memory or reasoning) may reduce the risk of developing dementia, according to a study published in the journal Alzheimer’s & Dementia. Doctors have long advised aging adults to stay mentally active to reduce their risk of dementia.  Yet this is one of the first large, well-controlled studies to compare different types of brain training and to measure their benefits over time.

Researchers placed participants in one of four groups. The first group received no special intervention or training. The second group received memory training. Researchers trained the third group in problem solving, pattern recognition, and general reasoning. The fourth was trained to speed up their visual processing by playing a digital racing game.

At five years, researchers found no differences between any of the groups. Ten years following the training, 260 participants had developed dementia. The speed training group had a reduced risk of dementia compared to the control group. The memory and reasoning training groups did not.

Other Ways to Prevent Dementia

Dementia remains poorly understood. It has no cure, and there are limited treatment options. However, lifestyle changes may lower the risk the disease, even among people with a genetic predisposition.

Research published in 2014 suggests exercise can counteract the effects of a gene associated with developing Alzheimer’s. A 2015 study identified several modifiable Alzheimer’s risk factors, including depression, abnormal blood pressure, and a high or low body mass index (BMI) in middle age. A study published in 2016 found that yoga was more effective than brain training at preventing dementia.