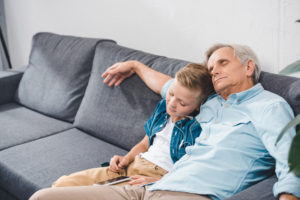 According to a new study published in the Journal of Alzheimer’s Disease, singing and listening to music may be able to reduce some symptoms of dementia.

Dementia—a group of degenerative brain symptoms rather than a single condition—is a global epidemic, with 7.7 million new cases each year. Alzheimer’s, a common form of dementia, is the sixth-leading cause of death nationwide, according to the Alzheimer’s Association.

To test the effects of music on symptoms of dementia, researchers recruited 89 pairs of participants with mild to moderate dementia and their caregivers. Before and after the study, participants took assessments evaluating their memory, thinking skills, executive function, and ability to find their way around.

Nine months after the study, participants in the singing and music groups had improvements in navigational ability, cognitive skills, executive function, and memory. Among those younger than 80 with mild dementia, the results in the singing group were especially pronounced. For those with advanced dementia, listening to music provided the most benefits.

Musical skill did not affect the results. Those who previously sang or played a musical instrument and those with no musical experience had similar outcomes.

A New Option for People with Dementia

Treating dementia can be costly and time-consuming, but the study’s authors say their research could offer new hope to people with dementia and their families. Musical activities, they suggest, could provide meaningful stimulation while helping to ease symptoms. For people newly diagnosed with dementia, the results are especially promising, as the best results were among those with early and mild symptoms.