A Simple Daily Practice to Reduce the Impact of Posttraumatic Stress 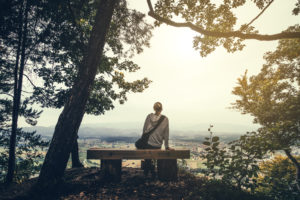 What if I told you a simple daily practice could help reduce the ways posttraumatic stress (PTSD) engulfs people? Mindfulness—practiced for only a few minutes each day—has been found to provide a number of benefits (Siegel, 2010), many of which can help people with PTSD to more easily and effectively work through the issues that come with trauma.

Mindfulness cultivates an attention and awareness of the present moment with an acceptance that allows for letting go of negative judgment (Germer, et al., 2005; Siegel, 2010). This can be difficult for people working through PTSD, a condition in which re-experiencing or reliving a scary, overwhelming event may be continuous (APA, 2013; Resick, et al., 2008). There is often a sense of hyperarousal or strong emotional and physiological reactivity in response to situations, thoughts, feelings, and events that remind them of these trauma events (APA, 2013; Resick, et al., 2008). There can be a sense of feeling “stuck” and caught in a loop where it seems impossible to escape the trauma or other perceived threats.

With mindfulness practices, including meditation and other techniques, we can stay focused on what is happening in the here-and-now to get an accurate sense of whether there is an actual external threat. This can also help us to more effectively deal with upsetting and unsettling feelings that arise when we are dealing with the trauma response cycle. Over time and with practice, we may begin to rewrite the trauma-based script that keeps the sense of danger present.

To more clearly explore this, let’s consider our physiology following a traumatic incident. The brain is in a constant state of change based on our experiences, a concept referred to as neuroplasticity (Germer, et al., 2005; van der Kolk, et al., 2005). When we are faced with what our brain views as constant danger, the brain changes as a defense against further trauma.

Neuroimaging techniques have highlighted three areas of the brain regularly affected by PTSD (Karl, et al., 2006). The first is the amygdala, which alerts us to threats and danger. The amygdala sounds an alarm signal, our fight/flight/freeze response. Following a trauma experience, the amygdala is on constant alert and hyperactive, sounding a danger alarm even in the absence of actual danger. It’s as if a “DANGER!” button has been activated and cannot be shut off (Karl, et al., 2006).

Mindfulness allows us to begin to slow down this hyper-alert signal. In fact, studies looking at mindfulness practitioners have found the amygdala was restructured to respond less actively to difficult, overwhelming situations (Hölzel, 2011).

With the amygdala hyperactivated, it is in constant dialogue with the hippocampus, an area of the brain that is critical for learning and memory. The hippocampus is the second area of the brain affected by PTSD (Karl, et al., 2006). It serves to organize and integrate our memories and sort them into pieces that not only make sense, but follow a timeline.

Among people with PTSD, this brain region has been noted to decrease in size, resulting in fragmented memories, flashbacks, and intrusive memories about the trauma, as well as difficulty parsing out facts from feelings (Karl, et al., 2006). With the anguish that comes from these kinds of experiences, the amygdala is again reactivated.

Mindfulness has been found to help enlarge the hippocampus of those who practice it over a period of a few months (Hölzel, 2011). This means mindfulness can begin to help rehabilitate the negative neurobiological elements of trauma that contribute to the struggles we see in people with PTSD.

With mindfulness, we can begin to shut off the danger signal when there are no threats so we can re-engage in the pieces of our lives that have become overwhelming. We can also begin to reorganize and reintegrate memories so fragmented memories of the past trauma can stop setting off the alarm signal. This may allow us to create new memories of experiences in the present day.

The final area of the brain that PTSD acts upon is the frontal lobe—the prefrontal cortex, which plays a key role in impulses, emotions, and fear responses (Karl, et al., 2006). For those with PTSD, this area becomes more still, creating more reflexive and reactive responses to situations.

As we use mindfulness to cultivate more awareness and clarity in our present experiences, we begin to restructure the amygdala and hippocampus (Hölzel, 2011). The prefrontal cortex begins to create more room to play out its role, allowing for more deliberate choices about interacting with our environment rather than falling prey to perceived threats.

With these simple practices supplementing therapy interventions, the impact of PTSD may be reduced. Contact a licensed therapist who specializes in trauma for information about specific practices that may be beneficial to you.