Sex After 65: How Do Seniors Feel About Their Sex Lives? 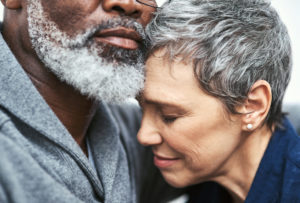 New data shows people remain interested in sex throughout the aging process. According to the National Poll on Healthy Aging, 40% of Americans ages 65-80 are sexually active. Most seniors (76%) view sex as an important part of a healthy relationship.

Researchers gave an online survey to 1,002 seniors (ages 65-80) in October 2017. The poll involved a randomly selected, nationally representative sample. The research was conducted by the University of Michigan’s Institute for Healthcare Policy and Innovation. Michigan Medicine and the American Association for Retired Persons (AARP) sponsored the study.

Overall, 54% of respondents said sex is important to their quality of life. Men are more likely to value sex this way. Seventy percent of men and 40% of women agreed sex contributes to their personal well-being.

Over a third (37%) of seniors said they are “extremely” or “very” satisfied with their sex lives. Women were more likely than men to have high satisfaction (43% of women vs 31% of men).

Other key data points include:

In America, discussing sexual health is often taboo. Intimacy issues are rife with stigma, which can in turn lead to shame or low self-esteem.

Stereotypes about aging can compound these issues. Thus, seniors are especially likely to avoid discussing their sexual health.

The poll above found only 62% of seniors would be willing to talk to a health care provider about a sexual health issue. Thirty-six percent would prefer to talk to a partner or spouse. Ten percent would talk to a relative or friend, and 17% would tell no one.

Although 62% of seniors said they would talk to a health care professional about their sexual health, only 17% did so in the last two years. Three in five of these seniors brought the subject up themselves. Two in five said their health care provider began the conversation.

Regardless of who started the talk, most seniors (88%) said they felt comfortable discussing their health. Thus, health care providers who start a conversation about sexual health are unlikely to alienate their patients. In fact, the study urges doctors to talk with people about this subject. Addressing sexual health issues can do a lot to improve seniors’ well-being.

A mental health professional may also help seniors experiencing issues with intimacy. If a couple’s relationship has been affected, couples counseling may help them strengthen their bond. Sex therapy may also be appropriate.