Severe CTE Found in Brain of Aaron Hernandez, and Other News 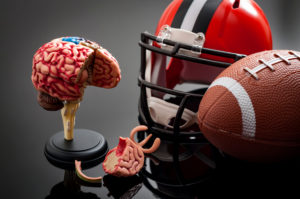 A posthumous examination of the brain of former New England Patriots tight end Aaron Hernandez, who died by suicide in April while imprisoned for the murder of Odin Lloyd, found signs of chronic traumatic encephalopathy (CTE). According to a lawyer for the family, the case was the most severe examiners had seen: Though Hernandez was 27 when he died, his brain showed damage similar to that of players in their 60s.

CTE is a chronic degenerative brain condition caused by repeated brain trauma. According to a 2017 analysis of the brains of former NFL players, 110 of 111 former players had signs of CTE in their brains. Research published in 2015 found high rates of brain disorders among NFL players. Also in 2015, former players settled a lawsuit that alleged NFL play causes extensive brain damage with the league.

Some research has found a link between CTE and behavior changes, particularly aggression.

How Can We Improve the Mental Health of Girls and Women?

Women and girls face disproportionate rates of mental health diagnoses such as depression and anxiety. Promoting a culture of resilience, encouraging women and girls to avoid perfectionism, and increasing access to mental health services are all steps likely to support greater mental and emotional well-being.

Research has already shown that exercise can improve mood, which might support people struggling with self-control. According to a new study, exercise also directly affects self-control. The small study tested the role of exercise in delayed gratification. In a lab setting, people who exercised by walking and jogging became better at delaying gratification than those who did not exercise.

Nicotine in E-Cigs is Not Only Addictive, it Might Also Increase Your Risk of Heart Disease

In people who smoke electronic cigarettes containing nicotine, the prevalence of a biomarker associated with heart disease increases. The increase can occur following just one puff of an e-cigarette. Previous research has found that e-cigarettes produce dozens of potentially harmful chemicals.

An Upbeat Mood May Boost Your Flu Shot’s Effectiveness

According to a study of 138 people between the ages of 65-85, a positive mood could improve the efficacy of the flu shot. People who were in a better mood when they received the shot had higher blood levels of the antibody to H1N1, a potentially deadly strain of the flu, at four and 16 weeks following their vaccination.