School-Based Violence: A Call to Action for Trauma-Informed Care 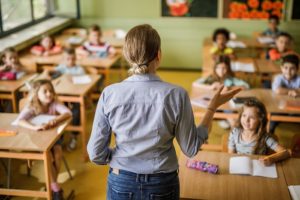 On February 28, 2020, the Pasadena Star News released an article advising the community that an active shooter drill at San Marino High School was canceled following parental objection and the ACLU raising concerns regarding the potential negative impact of such a drill—which, reportedly, would include San Marino Police Officers firing blank shots in four campus locations in an effort to help students “differentiate between gunshots and other sounds” (Gonzales, 2020).

As a trauma expert, licensed psychotherapist with a private practice in Pasadena, California, and alumna of San Marino High School, I was particularly saddened to hear that my own high school—a school I hold in high regard—would jeopardize student’s mental health by engaging in such behavior.

I graduated from San Marino High School in 1995, and I cannot recall a single day I went to school fearing my safety may be compromised. In those days, if I was under my desk clutching the leg of a chair, it was because of an earthquake drill. But the potential for an earthquake differs from an act of terror—and the issue is far more complex and trauma-laden than the largely abstract concept that Mother Earth just needs to shake out her wiggles.

As a high school student, the thought that someone could charge on to my school campus with a gun simply never occurred to me. Unfortunately, times have changed since my high school days, and our children are growing up in a very different world—a world where school-based violence is a traumatic event that far too many students experience.

As a clinician, I appreciate that school districts are recognizing the need to address school-based violence, and I believe their motivation is to arm students with knowledge and a plan should they ever be faced with a threat to their safety. However, doing so without the support and collaboration of licensed psychotherapists with an expertise in trauma is irresponsible and may actually be causing the very outcome school administrators are trying to circumvent with the drill. More specifically, the current practice of active shooter drills in most schools is resulting in a negative impact on the mental health of the students.

Instead of minimizing the potential impact of a trauma response should the school find themselves under attack, active shooter drills are resulting in clinical levels of anxiety, depression, and posttraumatic stress in children who otherwise have no history of and may have never developed these conditions (Chuck, 2019; Shalchi, 2019; Peterson et. al, 2015).

The Psychological Impact of Simulated Violence

Historically, research has shown that participating in simulated acts of violence can have severely impairing psychological consequences for individuals—both in the short-term and the long-term (Zhe & Nickerson, 2007). Arguably one of the most controversial studies in the field of psychology is Dr. Philip Zimbardo’s 1971 landmark study known as the Stanford Prison Experiment, wherein Zimbardo explored the power within social constructs to influence behavior (Haney, Banks, & Zimbardo, 1973).

While Dr. Zimbardo’s famous study looked specifically at the prison population and the power differential between prison guards and inmates, his study demonstrated that, even when all participants are aware the experience is a simulation, participants can quickly lose sight of their participatory role, and the psychological effects can be devastating. Although Dr. Zimbardo’s study was originally slated to last 14 days, the experiment was terminated after just 6 days due to concern regarding the psychological impact the study was having on both prison guard and inmate participants.

Further research on the psychological effects of self-selected participation in simulated experiences has been shown to have a devastating impact as well. Specifically, research has shown severe trauma responses to military survival training exercises (Lieberman et al., 2016; Taylor et al., 2011; Dimoulas et al., 2007) American citizens with no firsthand connection or loss on 9/11 meet clinical criteria for PTSD simply due to the repeated exposure to the media reports and videos of this profound tragedy (Otto et al., 2007). Further, emerging literature on the efficacy of active shooter drills has shown them to be largely ineffective in preparing students for a potential act of terror on their school campus.

In my own private practice, I have seen a sharp increase in traumatic stress responses in minors, some of whom report their symptoms are directly correlated with the rollout of these campus drills. In spite of the fact that most students are advised the event is a drill, minor clients are reporting:

I am seeing an increased prevalence in hypervigilance and emotional dysregulation—and, in some cases, full-blown posttraumatic stress. Among the list of collateral damage from the trauma these children are experiencing is significantly impaired academic performance—and it’s not hard to imagine why. It can be difficult for a student to focus on an upcoming Algebra quiz if they are consumed with fear over whether they will live long enough to take that quiz.

While I believe San Marino High School likely had the best of intentions and simply lacked insight into the complexity of the issue and the potential psychological impact firing blank rounds of simulated gunfire may have on young kids, I’ve had the unfortunate opportunity to learn that not all our local schools place a high value on the social-emotional health of their students.

In October 2019, I conducted a third grade classroom observation at a small private school in Pasadena. My visit happened to coincide with an active shooter drill. Although I have had many clients share their personal experience of active shooter drills in-session, I had not had the opportunity to personally observe the execution of such a drill.

I was informed of the drill upon my arrival to the school and was advised the drill would occur later in the morning, but I could never have predicted the level of dysfunction that would ensue, nor the blatant disregard for the emotional dysregulation and confusion the children experienced following the drill. Not only was the drill an epic failure on a tactical level, but there was not a single moment dedicated to giving language to the children’s experience, answering their questions, providing them with relevant and age-appropriate information, affirming the adults responsible for their care are competent to manage a campus crisis, nor processing the feelings they may have been experiencing.

After spending 20 minutes of ushering children into a cabinet to hide, taping butcher paper over a few of the classroom windows, piling the desks on top of each other in a misguided effort to barricade the doors, and then attempting to wedge the leg of a student chair under the door handles to prevent them from being opened from the outside, not only did the 20-minute exercise fail with both classroom doors easily being opened with the slight turn of the door handle, but the only directive to the students following the drill was, “please reset the classroom and continue working.”

Later in the week when I met with the client’s parents to discuss my observations, I learned that my client’s younger sibling, who attends kindergarten at the same school, was informed the class was merely “playing a game of hide-and-seek.” The younger child was so confused by the messages received that we spent considerable session time processing the children’s experience during the drill. Both of these children are extremely bright for their age—the younger child reported, “No one was looking for us—and if someone had a gun and was going to shoot kids, then we wouldn’t want them to find us.”

At the tender age of five, this child clearly understood the active shooter drill was not aligned with the goal of hide-and-seek, which is for the person who is “it” to seek those that are hiding. As a trauma expert, I was so upset by what I witnessed during my classroom observation that, when speaking with the head of the school, I extended the offer to facilitate an assembly for parents and children to directly address questions and concerns regarding campus-based violence, gratis. I extended a second offer by e-mail a few days later. To date, I have received no response.

While I’m willing to concede part of the problem at this particular school may relate to deficits in training, there is a far greater issue that needs to be addressed when it comes to educators employing any exercises that may have a significant impact on the psychological health of the students in their charge. Within most professions, there exists a scope of practice standard, which provides a framework outlining the services a professional is deemed competent to provide and perform. However, scope of practice speaks to more than just an individual’s educational degree or the terms of their professional license.

Practicing within one’s professional scope also requires that individual service providers have a fundamental understanding of their own limitations with regard to education, training, and experience. Providing a responsible and appropriate standard of care to others requires one have the ability to recognize when a presenting issue may require a higher level of care or care from a provider with specialized training and experience. In other words, just because your professional license permits you to do something doesn’t make it right.

School-based violence is an important issue that impacts families across the nation, and the majority of the missteps in managing this crisis are a product of well-meaning educators and administrators that have stepped outside their own professional lane. Addressing the crisis of campus violence in a responsible manner requires a trauma-informed lens and a collaborative effort across professional domains to ensure that our smallest humans are protected in every way imaginable.

Additionally, parents and children need to be extended the opportunity to make an informed choice and have the opportunity to decline participation in such events extended without shame, should they wish to do so. We all want our children to feel empowered and safe at school, and this requires that we take great care not only of their minds, but also of their hearts.