Scared Stiff: Breathwork Brings One Person Back into the World 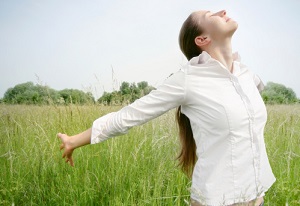 As David Frawley wrote in Yoga: the Greater Tradition, “Breath and Mind are connected like the two wings of a bird. The breath reflects our thoughts and emotions…fear makes us forget to breathe.”

Emily’s boyfriend dropped her; he told her he wouldn’t ask her out again because she was like a parrot, she always agreed with him. “It’s like you’re not there, Em,” he said. About the same time her favorite teacher told her basically the same thing—she was smart, but didn’t seem to have a mind of her own; the teacher suggested Emily might need help, so Emily decided to see a psychotherapist—me.

Emily told me her story, laughed, said she was silly, and looked half ready to go and half longing to stay. “That’s no reason to see a therapist,” Emily said. She sat rigidly on the edge of her chair, so stiff and straight she looked like she was balancing a book on her head. She made none of the little movements people use to get comfortable. In fact, she didn’t move at all. She often held her breath, and breathed mostly from her chest.

I had the strong feeling that I shouldn’t breathe, either, that any move I might make—even something as subtle as a blink, would hurt Emily somehow. She couldn’t tell me how she felt, but she could show me—she couldn’t speak freely or think for herself, and she wasn’t allowed to move a muscle. She was always scared, and her body showed it; she walked stiffly with short mincing steps, as though treading on egg shells; her face was frozen in an expressionless mask; she rarely spoke, and her voice was very soft when she did speak. She was trying to be invisible, even from herself.

For many months I gently listened to the lists Emily made of her days. Emily was passive, and always agreed with me, just as her boyfriend and her teacher said. She was a chameleon—blending into the background to avoid being noticed.

When she was a little girl Emily often woke up from nightmares in the middle of the night; she pulled the covers over her head, making sure they were completely and tightly tucked in, held her breath, and became invisible. Her parents didn’t protect her, and were even abusive sometimes; when she told me about family life she said it was okay, but she spoke like a robot, and looked scared stiff. Emily often felt cold, and I offered her a blanket, something, she said, her parents would never have done—they would have told her she wasn’t cold, just complaining.

Psychotherapy creates a safe space where mind and body can come together and find peace; the therapist uses mirroring, empathic understanding, metaphors, and stories; the therapist’s reactions may be different than expected, creating kinder pathways. I wanted to help Emily write a new story for herself, and I wanted her to relax.

One day I asked Emily if she would like to begin her therapy sessions with a brief centering experience—belly breathing. I showed her how to breathe deeply, filling up her lungs, hoping this would help her inhabit her body and calm down.

Starting our meetings with a breath centering technique brought us closer together. Emily became more attuned to her body’s hints when she was beginning to feel anxious, and was able to enjoy the feeling of slow complete breaths, the energy of the in-breath, and the deep relaxation of the out-breath.

Emily was feeling safer and could breathe easy. She had found her original, primordial breathing rhythm, and experienced peacefulness in a safe place with another person, allowing the deep self to emerge and feel accepted. She was in tune with herself and others, the beginning of mindfulness. Her relief from stress and anxiety, and her growing ability to catch herself tightening up and soothe herself before the anxiety took over, had a profound effect on her experience of being in the world. She felt stronger and more collected, no longer a victim.

Her talk in therapy changed too, now less a recitation of events and more a consideration of their meaning, and why they were significant to her and to others. In short, she was able to reflect on her experience, and hold firm in the face of powerful emotions; as her sense of self became more coherent, she developed qualities of mindfulness. She was less reactive and more spontaneous, and began to see herself as worthwhile and good. Her friends told her she was different, more alive.