The Rewards of Raising a Child Who Is ‘Different’ 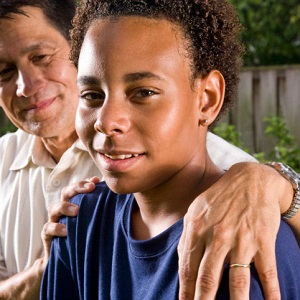 I spend a lot of time these days talking to parents, especially mothers, who have transgender kids. It has made me think a lot about raising a child who is “different”—perhaps different from the parent, but mostly different from his or her age peers, school, or community.

I have tremendous love and respect for these moms. Their love for their children is so evident, and they try so hard. Many parents feel blindsided when they learn they have a transgender kid. First they have to deal with all the complex emotions—loss of the child they thought they had, adjusting to a new one who may feel like a stranger, confusion, perhaps prejudice or internal conflicts due to religious beliefs. Even after these parents have come to accept and feel pride in their children, they have to deal with fears about how society will treat them.

I also have a lot of empathy, because although none of my children are transgender (at least that I know of, yet), all of my kids have been “different.” My son Cory, raised with my co-mom/partner Nancy, was obviously different from most other kids because when he was born in 1983, few children had lesbian moms. And my three daughters, Cory’s sisters, are all adopted and Guatemalan. Jesse, who died in 2004 at age 9, was adopted as a newborn and thus was culturally American middle class, growing up with the same language, stories, and events as her U.S.-born peers. But she was still Latina, and she occasionally reminded me that she was brown and I am white. Because Jersey City is very diverse, as was Jesse’s charter school, I don’t think Jesse ever felt like an “outsider” in her community or family during her short life. But she also had a serious learning disability that at times made her continued presence in a “regular” school doubtful at times, and I wonder, had she lived, whether she would have been bullied or shamed by other kids.

My daughters Alejandra and Diana, now 19 and 15, are not only brown, but lived in an institution in Guatemala until their arrival in the United States nine years ago, giving them a traumatic history rarely found in U.S. children. When they came here, they spoke not a word of English, and they still speak with slight accents now. Even in Jersey City, few of their schoolmates have their impoverished backgrounds or accents, and this has set them apart from their peers. Sadly, my girls have been subjected to some ugly racism in a super liberal part of the country. Other children have called them “dirty Mexicans,” and people laugh at their accents and their English mistakes.

The first thing parents of kids who are “different” have to do is to learn to love and appreciate their children. Learning how to see, accept, and appreciate your child’s difference is just the first step, but it is critical. One of your jobs as the parent of such a child is to validate his or her worth in an environment that may be sending messages that destroy his or her ego. Research has shown that having a loving and supportive family can help buffer LGBTQ kids from the effects of bullying; I believe the same is true of all kids who don’t “fit in.” As parents, we need to convince our children who are “different” that they are beautiful even when the outside world is telling them they are defective.

Finally, in order to effectively parent children who are “different,” you need to have a full understanding of the challenges and/or discrimination your child will face so that you can protect them to the best of your efforts. Under the best of circumstances, you will find a community to raise your child where the people who impact their day-to-day lives—teachers and school administrators, neighbors—are as supportive as you. Nancy and I moved to a gentrified area of Jersey City from suburban New Jersey in large part to place Cory in an environment where he would not be persecuted for having two moms. Our new neighborhood was full of other gay people and liberal New Yorkers who liked living with gay neighbors, and Cory experienced very little social rejection.

But not everyone is able to do something as drastic as uproot themselves. If you are stuck living someplace that does not offer enough community support, and may even be hostile, you need to construct a network of supportive people to buffer your child from hostility. And you must become an advocate for your child in the school system, where kids spend more waking time than they do at home. You can insist that the school provide support and help for your child, and a harassment-free environment.

No matter what you do, you may not be able to completely protect your child from discrimination. It’s important to keep perspective at those times and not blame yourself too much. Believe it or not, there are some benefits conferred by growing up “different.” Although I would never recommend trauma to promote growth—in general, trauma damages children—those who survive are, indeed, stronger afterward. Strength and self-confidence come from successfully overcoming adversity. Children who don’t “fit in” often develop independent characters and the ability to question authority and think for themselves. And they frequently grow up to be more empathic adults, instinctively able to connect with people who are suffering.

There are benefits to being the parent of a child who is “different” as well. You gain an understanding of the world from a different vantage point. As Jesse’s mom, I became aware of how demoralizing, even hellish, school can be for a child who is challenged. As Cory’s mom, I came to appreciate the delicate position of a child who has to constantly explain why his family has two mothers and no father. Being Diana’s and Alejandra’s mom has given me deep empathy for non-white immigrants who come to the U.S., struggle with the language, and are looked down upon and assumed to be stupid because of their accents. And all my children have taught me about resilience, strength, and the power of radically accepting love.

My world has expanded because of my experiences raising “different” children, and my children’s world has expanded, too. We’ve all had to stretch to understand family members who are different from ourselves. In doing so, we’ve learned to see the commonality below the differences, the human hearts and connections that unite us all.