Relationships and Borderline Personality: How Therapy Helped Me Grow 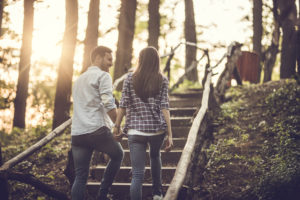 During early childhood and throughout my adolescence, I lived in chaotic and toxic environments that I could not control. My parents argued frequently, and the mood in my household was often tense. The stability children need during their most formative years was not really present for me.

That is not to say I have no good memories from childhood. But if you were to ask me about my early years, the first thing I’d share was how emotionally difficult they were. I have always been a highly sensitive person, and the constant tension within my house fostered the development of borderline personality, which I was diagnosed with when I was 19 years old.

I remember crying as a child—a lot. When my parents dropped me off at school, I would cling to them desperately, latching onto them with all my might. I remember bringing photos of my mom and dad to school with me in first and second grade so I could look at them to make sure they were still there, even if they weren’t physically with me. But even that strategy only worked for a brief period of time.

Within an hour or so of my arrival at school, I’d end up going to the nurse’s office, complaining of a stomachache. In reality, my discomfort was the result of pure anxiety, of constantly feeling unsafe no matter where I went. Throughout all of school, elementary and beyond, I never felt like I belonged. I had friends here and there, but I lacked a sense of true belonging, and I never felt connected to my peers.

This lack of connectedness continued into adolescence. When I became older and started dating, none of my relationships were healthy. Again and again I found myself in abusive relationships in which there was a lot of fighting. And by fighting, I don’t mean small arguments—I mean screaming matches and the use of suicidal threats to one another as a tool to manipulate. Obviously, that is the quite far from a healthy relationship, but unstable relationships were familiar to me. In fact, they were all I knew, because they were what had been modeled to me. The last of these relationships (which ended years ago) was characterized by fights every other day, constant breakups, lies, and manipulation. Eventually, when I couldn’t take it anymore, we broke up for good.

After that relationship, I stayed single for about a year and a half. During this time, I basically cut myself off from everyone. Things weren’t going well at home, so I spent a lot of time alone, writing. At this point, my mental health issues were still undiagnosed, but I knew something was wrong. I didn’t feel like I belonged anywhere, and I couldn’t understand why I always ended up in bad relationships. I had noticed patterns in my behavior that kept coming up in my relationships, such as:

When I look back, I realize I should have tried to find a therapist at this point. But at the time, getting help to address these patterns and my feelings had not even crossed my mind.

I was still desperate to change this narrative, even if it didn’t occur to me that I could work to do so in therapy, and I eventually became involved with my current boyfriend. I was attracted to him because he was unlike anyone I had dated before. He was intelligent, respectful, and genuine. He had goals and ambition. But I also saw stability in him, something I have lacked my entire life. At one point early in our relationship, he told me he was seeing a therapist once a week for anxiety and depression. Knowing I had my own set of issues that needed tending to, I was inspired to find my own therapist. Thus, I began my journey in therapy.

That was in 2014. My boyfriend and I have been dating for a little over three years now, and I’ve never been happier or more in love. But because of my traumatic history and the previous rocky relationships I’d always deemed normal, my psyche still struggles with the idea of a healthily functioning relationship.

Mental health issues can make relationships challenging for all involved. It takes a patient, understanding, and dedicated person to stick with someone who is in distress. It also takes a great deal of strength and determination for a person struggling with mental health issues to continue to work hard on healing and recovery.

Due to childhood trauma and my struggles with BPD, what most people would consider a “normal” relationship was completely foreign to me at first. During the first year of my current relationship, I had no idea what I was doing or how to act, which was challenging for both of us. I didn’t know how to effectively communicate with him or express what I needed, especially during difficult times. For example, many people who have BPD don’t know how to control or healthily express their anger. Sometimes we unintentionally project it onto other people, and that was something I would often do to my current boyfriend, even though I would feel horrible after I realized I was projecting.

Just the other week, I had a panic attack during one of my classes at school and ended up having to leave class. I was very upset with myself for leaving because I knew that doing so might affect my grade. My boyfriend tried to calm me down and remind me that it wasn’t the end of the world. But in the heat of the moment, I didn’t feel the same way, so I interpreted his words as minimizing how I felt. I found myself projecting my frustration with myself onto him, even though I knew it wasn’t healthy and did not help the situation.

But instead of fighting, we continued to discuss the issue, processing and resolving my anger and the issue together in an effective and positive way. This is something we never used to do. In the past, I had not yet developed the ability to communicate in a healthy manner. His levelheadness, patience, and communication skills, combined with my commitment to therapy and personal growth, have helped things between us to continue improving—though I am still a work in progress!

Mental health issues such as borderline personality can make relationships challenging for all involved. It takes a patient, understanding, and dedicated person to stick with someone who is in distress. It also takes a great deal of strength and determination for someone struggling with mental health issues to continue to work hard on healing and recovery.

Seeing a therapist has played a significant role in my recovery. I have developed my ability to cope with difficult emotions and am learning how to adjust and function in a healthy relationship. Living with borderline personality is a daily battle. But it is my opinion that seeking help from a qualified, compassionate professional is one of the biggest and most essential steps a person can take to help improve not just their relationships, but also their overall quality of life.