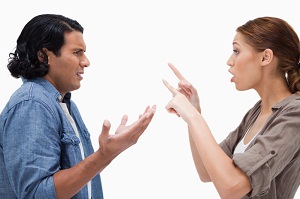 Robert woke up grumpy. Why shouldn’t he? He and Evelyn went round and round ’til past 1 a.m., not resolving the issue even at that late hour, and they went to bed in a grouchy mood. Maybe she could get over it quickly, he thought, but he couldn’t. Nevertheless, on his way out the door for work, he took out the garbage, more out of habit than anything else.

Evelyn’s reaction to his helpfulness was, “What’s the big deal about taking out the garbage? He should do that,” although in the interest of not inflaming the fight further, she didn’t say anything. She was still annoyed about the fight—she did not get over it—and this was compounded by his grumpiness. In fact, his helpful act was undone by the bad mood.

As a therapist hearing this story, I would have some trouble trying to persuade Evelyn to appreciate his help. After all, if Evelyn is still in a bad mood, I would never get through to her.

What do I do to help this couple?

Well, interestingly enough, there’s help in the Hebrew language. It’s due to the weird translation of what we would call “gratitude.” In Hebrew, the way this concept is expressed is “hakarat hatov,” and it translates to “recognizing the good.” I know what you’re thinking: What does recognizing anything have to do with showing gratitude? It seems unrelated. But if you follow me on this for a few moments, you can see how much sense it makes.

Evelyn can’t “appreciate” Robert’s taking out the garbage. As she says, it’s something he ought to do. She certainly would not deign to show him gratitude for this unspecial, everyday act. However, the landscape changes when we replace the word “gratitude” with “recognizing the good.” You see, I’m only asking Evelyn to catalogue a behavior, to make an unemotional assessment of Robert’s behavior: Is taking out the garbage a good thing or not?

Notice that we are not looking at the grumpiness. There is no equivalent of “recognizing the bad,” and there is nothing gained by examining it. We’re just forgetting the bad and seeing if any behavior adds up to “good.”

So, what’s the classification of taking out the garbage?

Seems good to me. I’d rather it was taken out than left in; wouldn’t you? No matter how annoyed Evelyn is about the grumpy start, the only way to classify the garbage chore is that it is “good.”

In practical terms, we are looking for a way to end endless fights and maybe, with some luck, begin the process of restoring the friendship that Evelyn and Robert wish they could have. By leaving off the accusations, the blame, and the emotional upheaval, we have a chance.

As the day goes by, Evelyn is still too irritated at Robert to speak to him. However, she does want to break the impasse. In other words, like so many people, she is kind of divided between what she knows is right and how she feels. I therefore give her the following homework assignment: Using a small piece of grocery-list paper, write at the top: “Good things Robert is doing.”

Since, in spite of herself, she had to agree that taking out the garbage was a good thing, she placed her first entry in her list: “Robert took out the garbage.” Evelyn sticks the new list to the fridge and then goes about her day.

How do you expect such a thing to go? Here is what happened:

Later that evening, Evelyn made dinner and left Robert a plate of the food. She then went to bed. Her feeling was that she did everything she possibly could under the circumstance. She was in no mood to be “nice,” and thought whatever she did do was nice enough.

When Robert came home, he immediately noticed the list on the fridge. Oh, yeah, I forgot to mention that the list should be either written on brightly colored paper or written with colored marker so it’s noticeable. His eyebrows went up. In this hurley-burley of bad feelings, he didn’t expect Evelyn to recognize something he did as being good. This was new. Some of the stress left him.

Then he saw a note by his spot at the kitchen table indicating that his dinner was left for him in the fridge. He got the dinner out, heaved a sigh, and went to the fridge, piece of paper in hand. He headed it: “Good things Evelyn did for me,” and wrote:

1. Made a list saying I did something right
2. Left dinner for me

He put it on the fridge and glanced at the two notes with some perplexity as he ate his dinner. Then he got ready for bed. Evelyn was asleep when he came upstairs. He stood looking at her for a while before getting into bed.

The two of them slept well that night; they felt good about doing something right in their silly war over whatever.

The next morning, they looked expectantly at each other and Robert broke the impasse. “Good morning,” he said pleasantly.

Does this solve everything? Of course not. But you know what it does do? It injects goodwill into the mix. Goodwill is that intangible thing that businesses earn by cheerfully taking back items customers return. It’s what keeps customers coming back to a store, and it is a very valuable asset in a marriage, too. Adding goodwill makes it hard to stay angry.

And when you’re not angry, you can have a rational conversation about whatever the problem was that was bothering you. You could not call writing dispassionate notes and leaving them on the fridge “gratitude.” But they clearly are recognition of good. Perhaps flowery shows of gratitude are unnecessary when simple recognition of goodwill breaks the impasse, takes the heat out of discussions, and moves people toward each other rather than away.