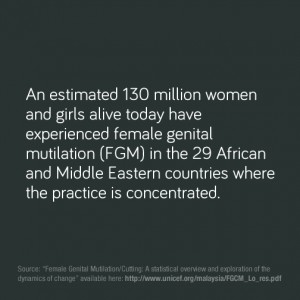 Female genital mutilation, or FGM, refers to any procedure in which the external female genitalia are altered, injured, or removed for non-medical reasons. The procedure generally takes place in early childhood, though in some cultures, it may occur later as a rite of passage into adulthood. The typical intention of the practice is to inhibit female sexual arousal. Viewed internationally as a human rights violation, female genital mutilation is the subject of much controversy.

There are several different types of operations that may be considered FGM, including:

In different parts of the world, FGM procedures are performed by professional circumcisers, midwives, barbers, healers, and/or healthcare professionals.

FGM is most commonly practiced in certain African and Middle Eastern countries. Across the 29 countries in which the practice of FGM is concentrated, more than 130 million women and girls have been affected by female genital mutilation. In some African nations, including Egypt and Somalia, FGM is nearly universal, and the majority of girls are cut between age 5 and 14. In many countries, though, girls undergo FGM before the age of 5. Practices and procedures vary widely among different communities.

The practice does appear to be on the decline in several nations, and in most countries where FGM is common, the majority of women and girls believe the practice should end. Men and boys tend to follow suit, demonstrating a decline in support for the practice.

Myriad cultural, religious, and social beliefs contribute to the continued practice of FGM. Although no religion requires the procedure, the belief that FGM is a religious requirement is widespread. Social acceptance tends to be the most commonly cited reason for continuing the practice.

Some of the more common causes and beliefs include:

Complications related to FGM can negatively impact both the physical and mental health of the person who received the operation. Physical complications may include:

In addition to the physical problems associated with FGM, studies have found that there can also be a wide range of psychological consequences. A 2005 study from the American Journal of Psychiatry examined the mental health of 23 women who experienced FGM. The study found that nearly 80% of these women met criteria for an anxiety issue, with posttraumatic stress being the most prevalent. Therapeutic techniques that have demonstrated effectiveness for posttraumatic stress, such as cognitive-processing therapy and eye movement desensitization and restructuring therapy (EMDR), may be especially helpful when providing therapy to these individuals.

For mental health professionals working with people who have undergone female genital mutilation, sensitivity and awareness are crucial in providing effective treatment. A victim of FGM may feel ashamed or frightened to discuss their FGM experiences or related health symptoms. Therapy can be a safe space for a person to examine their feelings, challenge negative thought patterns, or treat mental health conditions that may inhibit their well-being.

FGM is recognized all over the world as a human rights violation. Many world leaders, religious leaders, global organizations, and FGM survivors are working to extinguish the practice. It has been established that there are no health benefits to FGM procedures and there is no evidence that FGM is required by any organized religion.

In 1997, the World Health Organization (WHO), in partnership with United Nations Children’s Fund (UNICEF) and United Nations Population Fund (UNFPA), released an official statement expressing their position against the practice of FGM. In 2008, the WHO released another statement which expounded on the previous one and included a decade’s worth of research about the damaging effects of FGM, why it still goes on, and strategies to stop it. In 2012, the United Nations General Assembly passed a resolution calling for the elimination of female genital mutilation.

Outreach organizations continue to work toward the abandonment of female genital mutilation and their advocacy, education, and legislative efforts are making a difference. However, even though FGM is banned in many African nations, social norms often prevail and maintain the practice, and several countries such as Cameroon, Liberia, and Somalia still have no laws against it. Additionally, thousands of women who have been affected by FGM have migrated to parts of Europe that have incomplete legislation regarding the illegality of female genital mutilation. Even in countries where FGM is prohibited, more awareness and enforcement are needed.

Some people mistakenly liken female genital mutilation to male circumcision, which removes all or most of the foreskin from the tip of the penis. The potential complications and long-term physiological and psychological repercussions for women as a result of FGM are so severe, though, and the degree of cutting more extensive, that the two cannot be compared. Men who have been circumcised are unlikely to experience adverse physical or mental health effects as a result of circumcision, and although there are those who claim that the pleasure derived from sexual intercourse may be diminished as a result of having removed the sensitive foreskin, most circumcised men are able to maintain an erection, achieve orgasm, and otherwise enjoy sexual intercourse.