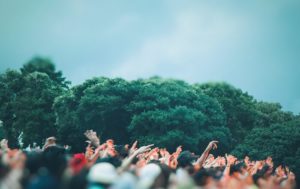 Deindividuation is the loss of identity or self-awareness, usually in a group setting.

Most of the time, people have a general sense of individuality and self-awareness that makes it easier to monitor their interactions with others, judge their behavior according to their values, and recognize themselves as separate entities from others.

Deindividuation occurs when a person’s identity with a group overrides their own identity and self-awareness. It can lead to a mob mentality, because deindividuation tends to prevent critical thinking and dissent. People in groups often feel less individual responsibility for their behavior and may feel that they will be able to act with more anonymity. They may also identify so strongly with a group that their individual feelings matter less. Religious settings, sports games, political events, and large organizations such as militaries can all cause members to deindividuate. Peer pressure to go along with groupthink may also play a role in deindividuation.

Deindividuation can occur in a wide variety of situations that involve groups of people. Some healthy and unhealthy examples of deindividuation include:

When it causes people to form a group centered around the desire to become a force for good, deindividuation can be positive. But the term is often used to describe its harmful aspects, such as violence and bullying.

Deindividuation is thought to be facilitated be a few different things, including:

Experts in the field of social psychology have also suggested that because basic emotions like anger and fear are so universal, it’s relatively easy for them to spread in a crowd.

Deindividuation is closely associated with the ideas of groupthink and conformity. Both of these concepts could be thought of as aspects of deindividuation. Some distinguish between deindividuation and groupthink by arguing that while deindividuation involves a loss of awareness, groupthink occurs when individuals actively shut down their individual thoughts in favor of the popular thoughts promoted by the group. Conformity can also be more of an active process than deindividuation, and it can even achieve opposing results. For example, individuals may conform to social norms that discourage behaviors such as vandalism and shouting in public.

Anyone is susceptible to deindividuation, but a strong desire to belong and a strong group identity can increase a person’s likelihood of deindividuation. An individual with strong political convictions, for example, is much more likely to deindividuate in certain social settings than someone who does not identify strongly with any political identity.

Highly stimulating groups—such as sports games with lots of action or military missions—can increase the likelihood of deindividuation, and some research indicates that large groups are more likely to cause members to deindividuate.