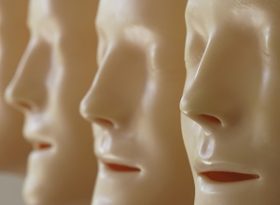 Conformity is the act of behaving, thinking, talking, or appearing in ways similar to other people, whether it is through a conscious change in behavior or beliefs or from an unconscious attempt to adapt to pressure, real or imagined, from a group.

The desire to be viewed favorably and be accepted by others is strong in social animals, including people. Therefore, conformity often requires no overt pressure; most people naturally adopt behaviors, beliefs, and appearances that are similar to those of peer groups. However, pressure to conform may be subtle or overt and might also be exerted by practices such as ostracizing people who do not conform or mocking people with different values.

Types of conformity include:

The desire to conform is either inborn or develops very early in life, suggests a recent study. The study demonstrated that people, even children as young as two, will often hide a skill in order to better fit in with a group. Often, conformity to a group’s norms occurs unconsciously. This can be seen in the way peer groups tend to mirror the body language and figures of speech of one another and in the way families adopt their own norms for greetings, time spent together, and acceptable forms of behavior.

Conformity is a neutral stance, but it can facilitate certain social issues. In some cases of conformity, a person’s desire to fit in with a social group can interfere with the ability to make moral or safe decisions. One example is when a person drinks and drives because friends do it, or because friends assure that person he or she can safely do so. More extreme examples can be found in the acceptance of unjust political systems or the refusal to dispute racist, sexist, and other oppressive and troubling attitudes out of a desire to conform.

Conformity is not necessarily negative, though. For example, a child misbehaving in a classroom setting might settle down and begin working upon seeing classmates doing so. A person speeding on the highway might slow down after realizing that other drivers are not driving nearly as fast.

Some degree of conformity is often necessary to fit into social groups. For example, in many cultures, wearing clothes in public is expected behavior. Not conforming to this social norm would result in confusion, gawking, possible concern for one’s mental state, and perhaps a citation. Those who conform to social norms are seen as “normal” and are typically not ostracized, but this can be problematic when the cultural expectation might be harmful to some or when certain people do not wish to conform but do so in order to avoid ostracism. Teenagers, for example, may often feel pressured to engage in casual sex, even if they do not wish to, because friends are doing so.

Historically, people who did not conform to social norms were often labeled as mentally ill. Women who sought the right to vote, for example, were viewed as maladjusted people who sought to destroy the sanctity of the home and marriage, and husbands and fathers could force them to submit to psychiatric treatment or institutionalize them until they conformed or gave the appearance of conforming. Additionally, homosexuality was once viewed by the psychiatric community as an aberration and a disorder for which an individual needed treatment such as reparative therapy. This classification changed officially in 1973, when it ceased to be listed in the Diagnostic and Statistical Manual as a mental disorder, although homosexuality is still often seen as an abnormal state, rather than a normal aspect of human sexuality.