Procrastination: Why We Set Aside Important Tasks 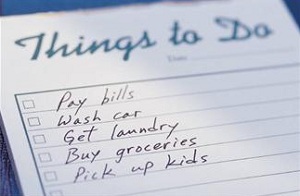 Most people have had the sinking feeling of disappointment and frustration that comes after spending an entire day surfing the web or finishing a week and realizing they’ve completed nothing on their weekly to-do list. Procrastination might be the great unifying trait of contemporary life.

One recent study found that unnecessary interruptions cost the economy $650 billion annually, but procrastination isn’t just a financial drain. Frequent procrastination can interfere with the ability to enjoy leisure time, particularly when people have to make up for lost work or are so stressed by a staggering to-do list that they can’t enjoy their time with their families. And yet people continue procrastinating, even when they’re aware it’s against their best interests. There are a few psychological factors at play, and by understanding procrastination’s causes, you may be able to limit its impact on your life.

Delaying the Painful
At its core, procrastination is an attempt to avoid things that might be unpleasant, difficult, or painful. Challenging tasks seem like they’ll somehow be easier in an imaginary future where life is less stressful and there is more time. This is a cognitive trick the mind plays; the reality is that the longer unpleasant tasks are delayed, the more unpleasant they typically become.

Perfectionism
Perfectionism and procrastination often are a package deal. For people who must complete every task perfectly, even small tasks can be daunting. Perfectionists often judge their worth by the results of one effort or the reaction they get from one person. When they’re afraid their efforts won’t yield a perfect result, this can be a strong incentive to avoid a task. Perfectionism is particularly likely to play a role in procrastination when a person is afraid of the outcome of the task. If you’re not sure if you’ll get a job but have decided that you must get a job in order to be a worthwhile human, you’re much more likely to avoid applying altogether.

Resentment and Rebellion
Procrastination can be a form of passive-aggression. When a task feels unfair, people are much more likely to procrastinate. Children do this all the time by delaying doing their homework, cleaning their rooms, or apologizing to a sibling. But adults are not immune to such behavior. When people feel that they don’t have control over their task list or that they’re being asked to do too much, they’re more likely to rebel by procrastinating.

Physical Symptoms
Sometimes procrastination is a physiological, rather than psychological, phenomenon. When your body’s not functioning at full capacity, it can be nearly impossible to focus on daily tasks. Chronic illnesses and pain can both cause procrastination. These distractions make it difficult to focus on a task and can overwhelm even the strongest will. But more mundane physical issues, such as exhaustion and hunger, can cause people to lose focus and start procrastinating. Taking care of your physical needs can help you avoid this.