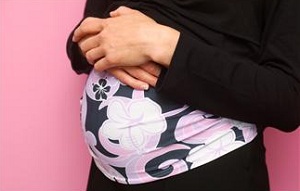 Pregnancy is known to be a life-changing and body-changing experience. And according to a new SELF and CafeMom.com survey, many women are focusing perhaps more on the body-changing part.

Although many women make a conscious effort to eat healthy for the sake of their own health and that of their newborn child, pregnancy tends to be a time where it’s more acceptable to slack off in the diet department. And some women are doing just that: overeating, while others are undereating and overexercising. Both of these extremes can be harmful for mothers and babies.

According to an article in The Huffington Post by a director for SELF, pregnant women are now having more challenges keeping a positive body image and keeping healthy eating habits.

The article states that 48% of pregnant women “engaged in disordered-eating behavior such as restricting calories, overexercising, restricting entire food groups, and eating lots of low-cal or lowfat foods.” In addition, 52% said “pregnancy made them more insecure about their body image.”

Women’s body image issues aren’t a recent trend, but pregnancy is generally thought to be more of a safe zone. Experts give their insight into this potentially new trend of body image problems and disordered eating among pregnant women.

Ramani Durvasula, a licensed clinical psychologist and a psychology professor at California State University, does think disordered eating and body image issues are becoming prevalent among pregnant women. She defines disordered eating as “eating habits that come short of a frank eating disorder.”

“I do think it is common among women, as it is a time of inevitable weight gain, and women who already struggle with eating may find pregnancy to be particularly challenging,” Durvasula said in an email. “I definitely think body image and self-esteem issues come to bear—because there is both a psychological shift in identity but also bodily changes that may sustain after the pregnancy—and for women who derive self-esteem from their appearance, pregnancy can be a real threat to that.”

“So there is a lot of interrelatedness, and add to that the mood swings, fatigue, and fears of being a new mother or repeat mother, and it is rich ground for impacting health behaviors such as eating and self esteem,” she added.

She said for pregnant women who have already engaged in disordered eating prior to pregnancy could very likely struggle even more so with those eating behaviors, as well as other psychological issues that tend to accompany disordered eating, such as “depressive symptoms, anxiety, self-esteem issues [and] a sense of discontrol,” Durvasula said.

Here are some signs of disordered eating in pregnant women from Durvasula:

1)    Excessive caloric restriction
2)    Periods of out-of-control eating (excessive amounts of calories), with compensatory behaviors such as vomiting, laxative use, diuretic use, or excessive exercise
3)    Overfocus on specific food groups (e.g., only eating fruit) or panic after eating a normal portion
4)    An obsessive quality permeates, with the women reporting that they frequently think about food, what they ate, how they look, and checking behaviors—such as pinching fat, taking photos, checking the mirror—are also sometimes observed.

She said disordered eating is separate from making healthy food choices and controlling healthy portions of food. “A person who eats portioned meals and avoids all fast food is likely not disordered in her eating—but it is a gray area and each case does need to be assessed individually,” Durvasula said.

For pregnant women prone to disordered eating, she suggests working with a dietitian and licensed mental health practitioner so they can be monitored accordingly to make sure they’re eating healthy for both mother and baby. It’s also necessary to have an extensive social support system.

“Motherhood and pregnancy are such challenging times,” Durvasula said. “The … media keeps shoving images of young starlets who are back to a size 2, three
weeks after having a baby. These images foster this madness. Pregnancy should be a time of health and it takes a village—not just to raise a baby but also to support a mother.”

He said that pregnant women are less likely than other women to have eating disorder problems. “Moms in waiting [overwhelmingly] want to do the right thing for their unborn child,” Gostine said. “We can conclude psychological disorders tend to temporarily improve during pregnancy.”

“Dieting during pregnancy can lead to an increase risk of childhood diabetes through mismatch expectations of what the fetus is expecting and the environment after birth delivers,” he added.

He helped conduct a pilot study using data from the babyQ iPhone app, which includes information about women’s pregnancies.

“In our own babyQ pilot study, way less than 50 percent met the goals for fruit, vegetables and whole grain consumption during pregnancy: overfed, undernourished,” Gostine said.

He has some tips for pregnant women who are struggling with disordered eating. “Believe in your baby, concentrate on loving that child, and the eating disorders will be easier to manage,” Gostine said. “It is no longer just about you, but about the two of you.”

Tammy Holcomb, executive director for CRC Health Group’s Carolina House eating disorder program, said in an email that, in fact, being pregnant doesn’t always mean an end to eating disorders. “Some women report stopping or slowing down on symptoms while pregnant, but many women are unable to control symptoms enough to stop,” Holcomb said.

She doesn’t think many women start having an eating disorder solely during pregnancy. “However, women do often start their ED when they are in a time of transition,” Holcomb said. “This is one reason so many women start in puberty. There is so much stress, change, and lack of control over the body during puberty. The same thing could be said of pregnancy.”

For pregnant women who are prone to eating disorders, already suffering from an eating disorder or just have body image issues and some disordered eating behaviors, it would be beneficial to see a therapist who specializes in eating disorders and women’s issues.

“I’ve worked in the hospital system much of my career and have seen many pregnant women on [eating disorder] units,” Holcomb said. “Most of them were women who became pregnant while already in the midst of an eating disorder. Many women stop their menstrual cycles due to low weight and think this means they can’t get pregnant. They often avoid birth control pills due to fear of weight gain. Also, women who purge by mouth (vomiting) often vomit up their birth control and are more vulnerable to getting pregnant due to this.”

Related articles:
Dieting: Our National Obsession
Do I Have a Healthy Relationship With Food and My Body?
Nutrition in Early Life Can Affect IQ