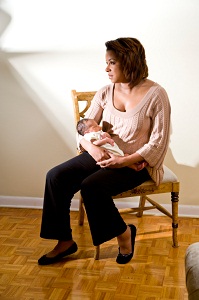 Pregnancy-Related Stress and Trauma
Women who experience extreme stress or trauma during pregnancy are more likely to develop depression. The death of a loved one, a divorce, or a lost job can increase the risk. But birth-related trauma can also play a role. Women whose babies are physically ill, who are taken to the neonatal intensive care unit, or who have developmental delays may experience more depression. And women who have negative experiences during childbirth—such as an emergency C-section or a hostile doctor—may also be at risk.

When pregnancy is unplanned, it can greatly increase the stress of planning and caring for a baby. Women whose pregnancies were unplanned, particularly those who feel ambivalent about their pregnancies, are more likely to develop symptoms of postpartum depression. Some medical professionals believe that a C-section is in itself a risk factor because of the increased recovery time and stress of major surgery.

Low Levels of Support
The first few weeks with an infant can be exhausting, even under the best circumstances. A strong support system, including helpful friends and family and an involved partner, can greatly reduce the risk of postpartum depression. But women who live away from family and friends, or whose partners don’t help them care for the baby, may also struggle more.

Difficulty accessing resources such as medical care can play a role, and women living in poverty and dangerous or abusive environments also tend to have more difficulties adjusting to motherhood.

Genetic and Life-History Issues
Depression tends to run in families, and women whose mothers experienced depression or whose immediate family members struggled with mental health issues are generally at an increased risk. Previous episodes of depression, bipolar, or anxiety—particularly during or immediately prior to the pregnancy—also greatly increase the risk of developing depression.

A history of substance abuse, particularly among women who continue to smoke, drink, or use drugs after the birth of their babies, can also increase the risk. Even among women who stop abusing substances during pregnancy, withdrawal and the struggle to stay clean can spark depression.

Although postpartum depression can be daunting, particularly among women who are breastfeeding and who are concerned about taking medications, it is highly treatable. An increasing number of therapists and other mental health professionals specialize in postpartum depression, and early intervention is key for preventing the most challenging symptoms.