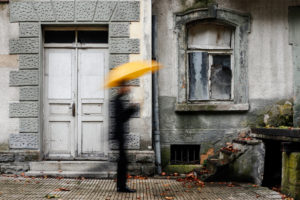 “The income gap between rich and poor continues to widen, many people live in racially segregated communities, the elderly are mostly sequestered from public life, and rampage shootings happen so regularly that they only remain in the news cycle for a day or two.” —Sebastian Junger

We tend to think of posttraumatic stress (PTSD) as an issue that develops within an individual because of what they have witnessed or experienced—after being exposed to a stressful event, they are enveloped or harnessed by the symptoms. There is the assumption of a causal relationship: like a clock with a faulty spring or missing screw, the person isn’t “running properly” or is frozen in time.

I developed the mnemonic HARNESS to make this simpler to remember:

While it may be helpful to understand how some people experience pain and distress related to trauma, PTSD may fall short as a descriptor when it is used without cultural or historical context such as the individual’s moment-in-time relationship to their socio-political environment.

In this state, a person’s nervous system becomes hyper-active or hyper-aroused. It can help to think of it as a system broken down into two parts, with one part “ramping up” the body and the other calming it down (i.e., sympathetic and parasympathetic nervous systems). Metaphorically, one is the gas and the other is the brakes, like in a car (automated or otherwise). One of the main symptoms in the criteria for PTSD is this “H,” or hyperarousal. The person is constantly slamming on the gas and may, for various reasons, be unable to hit the brakes. This can lead to chronic irritability, an exaggerated startle response, sleep disturbances, and a hyper-vigilant perception of threat.

To deal with a system unable to regulate itself, a person may use various avoidance tactics in order to evade the emotions, thoughts, and physical sensations characteristic of the disturbing event itself. Avoidance methods might include numbing through substance use or avoiding the place where the stressful event occurred, for example.

Avoidance can be described as a person’s attempt to step off the polarized roller coaster of hyperarousal and dissociation. You may hear people use terms such as “triggers” to signify the “R” in this acronym, which stands for re-experiencing. The feature of PTSD most people are familiar with is the “flashbacks” some individuals may experience. Re-experiencing can also include near-constant thoughts or rumination about events, as well as the construction of traumatic images, dreams, and nightmares associated with the trauma.

As a psychotherapist trained in aspects of eye movement desensitization and reprocessing (EMDR) therapy, I tend focus on the “N” in the HARNESS of PTSD symptoms while working with people in therapy. Conventional wisdom holds that those susceptible to developing PTSD may be more likely to have experienced adverse childhood experiences (ACEs) or violence in adulthood.

People, then, may develop negative alterations. This term, synonymous with “negative thinking,” describes a person’s beliefs about themselves that may be unrelenting and are often damaging. When a person is driven by this kind of inner criticism, they may be more likely to experience mood issues, such as depression, that can be moderate or severe. Certain aspects of EMDR therapy focus on these core cognitions and attempt to process the emotional distress associated with altered beliefs (“I am irresponsible,” “I am unlovable,” “I am out of control.”)

The mental experience of an event can lead to emotional dysregulation. The “ESS” refers to this beginning and the reciprocal process of exposure to stressful stimuli. If the mere thought or physical association leads the body to extreme states, it makes sense that an individual may try anything to avoid remembering and feeling this way. The external (physical) or internal (cognitive) experiencing of the event creates a cyclical process of both reliving and staying away from the emotions associated with it.

The individual acts as both detainer and hostage of this HARNESS. However, this can be a narrow way of viewing PTSD, and even a convenient aperture for the medical model of mental health in general, which can often lead to universally applied biological interventions such as psychotropic medications. The “individual” is removed from the social and political context they inhabit.

Junger (2016) views trauma from an evolutionary perspective in Tribe: On Homecoming and Belonging. The HARNESS is precisely the way you would want the body to respond if your life is threatened. Generation after generation of our ancestors required these mechanisms to survive. In a momentary, biochemical way, it often feels good to be hyper-aroused. Think of how you feel when participating in strenuous exercise, sex, and so on. The body releases floods of norepinephrine, dopamine, GABA and serotonin when stressed, and paradoxically, this biological process positively reinforces this pattern.

The stress response includes the secretion of adrenaline, which serves to cement the experience into memory. The stronger the emotion felt at the time, or the more personally meaningful an event is, the more memorable it is likely to become (van der Kolk, 2014). Similarly, the elasticated split of mind and body within dissociative processes is an adaptive pattern with biological benefits: opioid peptides, serotonin and dopamine levels increase (van der Kolk, 2014). This cements the avoidance pattern in the body.

Hedges (2002) and Junger (2016) both chronicle the intoxicating rush associated with combat. But the meaning of the event may be more than a blast of neurochemicals. The intoxication is distilled out of the courage, allegiance, and unselfishness battle requires. The “adversity” of the stressful circumstances “often leads people to depend more on one another,” which “can produce a kind of nostalgia for the hard times” (Junger, 2016; p. 92).

Furthermore, an aspect of the psychological pain associated with war is less to do with the battlefield itself and more to do with the absence of cohesive community service members may come home to. Veterans may move from a cohort of people serving a task greater than themselves to a politically polarized country. The individual exits the unity of the platoon and enters steeply hierarchical, individualistic culture. By its nature, the culture may alienate people while providing a mega-void instead of meaningful roles.

The modern service member “goes from the kind of close-knit group that humans evolved for, back into a society where most people work outside the home, children are educated by strangers, families are isolated from wider communities, and personal gain almost completely eclipses collective good” (Junger, 2016, p. 93).

Evolution of a ‘Me’ Society

Junger (2016) describes how recovery from trauma is influenced by the civilization one is plugged into. For example, the collectivistic culture of Sri Lanka appears to mitigate against chronic stress exposure. Sri Lankan soldiers have significantly lower rates of physical and mental health issues than U.S service members, despite far more combat exposure than other troops (Junger, 2016).

Similarly, U.S. service members experience PTSD at twice the rate of British soldiers who were in battle with them and roughly 20 times that of Israeli operatives (Junger, 2016). The latter is a nation that requires military service for all adult citizens. This collective understanding of the individual and the service of others is embedded into the cultural fabric in Israel, as opposed to being two separate outfits in the United States.

My conclusion is we are the ones with PTSD, not just veterans, rape survivors, intimate partner abuse survivors, or neglected children. Lack of social support and consequential loneliness—paired with an individualistic lifestyle—is what I believe the “disease” (let’s call it post-tribal societal disorder) to be.

I consider Western society a frenetic river of individualism and self-interest. Those caught up in the stronger currents are viewed as “disordered” when they express symptoms (hyperarousal, dissociation) consequential to modernity (hyper-competitiveness, discrimination, polarization, alienation, and abuses of power).

Urbanization, financial independence, and wealth do not completely buffer one from psychological pain. The physical comforts associated with modernity and affluence have been swapped like risky mortgages, and the exchange rate is a return of increased depression, anxiety, PTSD and death by suicide across the globe (Junger, 2016).

The detached, non-response to the gross inequities of our society, including income inequality and mass incarceration, among others), paired with a deemphasis on service and community is what I believe to be the cultural harness gripping the West.

If you’d like to consider and explore these issues and how they relate to your well-being and experience, consider reaching out to a trained, compassionate counselor.