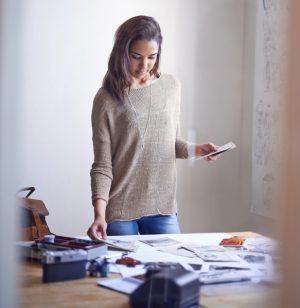 Many people tie personal possessions to memories as well as their sense of identity, resulting in clutter they feel they can’t throw away. Taking pictures of sentimental goods could help people get rid of clutter that may be causing them stress, according to a study published in the Journal of Marketing.

Clutter can be a source of immense stress, and people may feel overwhelmed by the prospect of decluttering. In some relationships, clutter is a chronic source of arguments. For some people, clutter is the result of hoarding—a mental health condition based on the tendency to collect large quantities of items that have little value or use, often to the point where the amount of clutter causes distress and interferes with healthy functioning. Statistics suggest as many as 1 in 20 people may experience hoarding.

The study was a collection of trials designed to assess how people feel about donating possessions and whether those emotions can be altered. For one study, researchers followed 797 Pennsylvania State University students living in six on-campus residence halls. At the end of the fall semester, researchers used two advertising campaigns to market a donation drive.

Both fliers were displayed in residence hall bathrooms to a similar number of students. At the end of the semester, investigators unaware of the study topic counted the number of items each residence hall donated.

The hall that used the memory preservation flier donated 613 items, compared to 533 in the residence hall that urged a donation, but not a photo.

Possessions as a Source of Identity

Researchers conducted other trials to assess the emotional connection people have to their possessions. They found sentimental objects can be a source of identity, not just memories.

In a study of people who donated items to a local thrift store, some people received instant photos of the items they donated. Researchers then asked whether donors felt a sense of identity loss after donating the item. Those who were given a photo were less likely to report identity loss.

The research sheds light on a strategy that could make it easier for people to give up items they no longer need, even when they have sentimental value. Along with therapy, this strategy could also offer some relief to those who deal with clutter due to hoarding.