Part I: How Co-Dependents Come Into Therapy 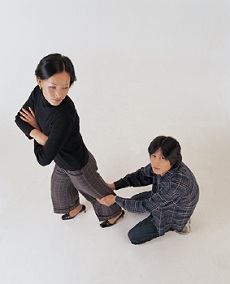 Rarely does a client call for an appointment and say that they want help with their codependency. One of the many issues that bring clients to therapy for codependency is relationship troubles. Sometimes a client will call with a broken heart and feel that they should have recovered from it by now. Other times there are problems with jealousy and trust issues. A client may call re: difficulty communicating with their spouse which often means the inability to resolve conflict. Other times a client calls to find out how they can get their partner to change something or get help.

I will talk a bit about how these issues may link to co-dependency and how people are helped in therapy. What about the client with a broken heart? Codependents learn to stuff and deny their feelings and don’t realize that the end of a relationship is supposed to hurt. It is the price we pay for allowing ourselves to care and be vulnerable. In therapy, codependents learn that it is okay to be sad, acknowledge their sadness and feel it. After feeling it for awhile it goes away. Another way a broken heart links to codependency is that codependents have a terrible fear of being abandoned. This is because at best they are often abandoned emotionally by one or both parents. Any kind of loss taps into those unexpressed feelings from childhood. So not only does the person grieve the relationship, but they also grieve the losses they never could as children. The person learns that they can cope with loss and becomes less fearful and more self-confident as they move on.

Let’s talk about trust and jealousy. Whenever I see a spouse extremely jealous with a partner that gives them no reason to be jealous, I always wonder about their primary caretakers. Usually, when people have trouble trusting everyone, it is because they couldn’t trust their family growing up. Often, people actually believe that if they are hyper vigilante enough that they can prevent cheating. We can’t. It is something that we are powerless over. People always wonder how they can be in an intimate relationship without being vulnerable to being hurt. The answer is that we can’t. When we love others there is always a risk of being hurt. Ironically, when we try to prevent being hurt by being overly controlling, we actually push away the very person that we are scared of losing. Clients learn in therapy that they are valuable, worthwhile people who deserve to be content in a relationship. They also learn that they will survive if the relationship doesn’t work out, and that they no longer have to accept unacceptable behavior.

The next relationship issue that brings in codependents is difficulty communicating. Usually at least one of the partners holds in their negative feelings until they explode. When people explode they almost never communicate effectively. Why do codependents avoid sharing negative feelings?  The reason is that they never could express negative feelings growing up. Everyone walked on egg shells so that the dysfunctional parent would not get angry or upset. Of course that did not prevent explosions but everyone tried to avoid them. I teach codependents how to fight fair and how to either resolve or accept their differences. I also teach people that they have a right to air their feelings and ask for help; they no longer have to do everything themselves.

The last relationship issue that brings people in that relates to codependency is wondering how they can change their partner, or convince their partner to seek help for anger management or a mental disorder or chemical dependency.  The short answer is that you can’t. It is impossible to raise adults. Even with our children, we do not have that much control over them.  I always teach clients the three (3) “C’s”.  We did not cause it, we can’t control it and we can’t cure it. Ironically accepting what we cannot control frees up a lot of energy for what we can control, which is ourselves. I teach people how to focus on themselves and direct their energy to taking care of themselves. Especially, when they have a sick partner who does not see that they need help. Surprisingly, when they get the focus off their partner, they usually stop enabling the partner, which makes it a little more difficult for them to remain sick. The next article will talk about how parenting issues bring codependents to therapy.