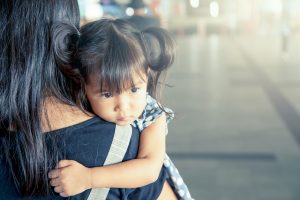 Parents may fail to notice symptoms of posttraumatic stress (PTSD) in their children for years, according to a study published in the Journal of Clinical Psychiatry.

While many media reports disproportionately highlight PTSD arising from military combat, symptoms can occur in anyone who experiences trauma. Abuse, exposure to natural disasters, life-threatening illnesses, car accidents, violent crimes, and similar traumas can trigger PTSD. According to the National Comorbidity Survey Replication Adolescent Supplement, 5% of teens meet diagnostic criteria for PTSD. The National Center for PTSD reports that no nationally representative studies have explored PTSD rates in younger children.

Does PTSD Go Unnoticed in Children?

The study included more than 100 children ages 2-10 who were involved in road accidents such as car crashes or being hit by a car. Investigators used PTSD diagnostic criteria to assess participants two to four weeks following the accident, then again at six months and three years. They interviewed all participants who were age 7 or older, as well as all primary caregivers.

They found stress shortly after a trauma does not necessarily correlate with PTSD in later years. Trauma severity correlated with symptoms of PTSD for as many as six months following the trauma, but not three years later. Three years following a trauma, parents of children with PTSD often failed to recognize their children’s symptoms. Even some parents with PTSD did not notice the same condition in their children.

Children were more vulnerable to PTSD if their parents also experienced it. Researchers say this could be due to feedback between the parent and child. A child with PTSD symptoms may be more stressful to a parent, and a parent’s response to trauma may partially shape a child’s reaction. The study’s authors highlight the importance of providing support for both children and their parents, so one person’s symptoms do not amplify the other’s.

The study highlights the need for both parents and clinicians to weigh the effects of trauma on children. The symptoms of PTSD are often different in children, and very young children may not be able to verbalize their symptoms.

Older children typically experience symptoms similar to those of adults, such as intrusive flashbacks, avoidance of people and places associated with the trauma, difficulty remembering parts of the traumatic event, and high levels of anxiety. Symptoms of PTSD in younger children may include: