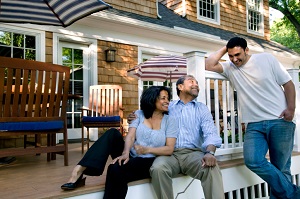 “Jane” and “Daniel” are in their late fifties. Having raised three children, they are ready to focus on their own needs. The economy has put some checks on their retirement plans, but more importantly, two of their adult children are in distress. Their daughter “Jessica” can’t seem to hold a job and, at 28, is still living at home. Despite every attempt on their part to hold her accountable, she hasn’t been able to make it on her own or find her path. Their 33-year-old son, “Andrew,” has a little boy with a toxic ex-wife, so he is in a never-ending custody fight with her, depleting his earnings and emotional stores. It is likely he will have to move in with them to afford his alimony and lawyer bills. So Jane and Daniel are often babysitting a 2-year-old in their spare time, as well as providing room and board for three more people than they had planned at this stage of their lives.

They don’t share this with their friends because they are somewhat embarrassed and feel they are to blame. So they deal with their troubles on their own, often arguing about how much they should be involved with their kids’ problems.

More and more, I see people stuck in the active role of parenting long after their children should have been independent. Sometimes it is just a young adult who, like Jessica, can’t find her path and feels a bit too comfortable at home to bother working her way up to the kind of job she thinks she deserves now. Often it is an otherwise responsible young adult who runs into some messy life situations and, like Andrew, lacks the reserves needed to ride out the storm at this stage of his career. Where does that leave the parents? We are inundated with information and guidance about parenting when we are expecting and raising young children; but where—and how—do we learn about dealing with our grown children’s issues?

We consider it our job as parents to provide for and help our children. But sometimes being a good parent means setting tough boundaries and holding our kids accountable—especially when they are adults. This can be very difficult, and we may have to tolerate watching them struggle and feel that we are mean or selfish. A first step might be to ask ourselves some serious questions before we automatically jump in to help and/or fix. Here are just a few to consider in the above scenario:

Next time, I will discuss some guidelines and suggestions for the above questions.