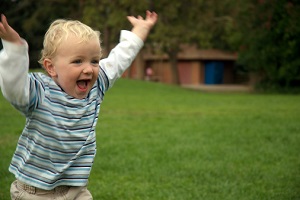 Toddlers get into a surprising amount of mischief. They flush toys down the toilet, pull things out of the garbage, throw public tantrums, bite babysitters, squeeze their baby siblings to life-threatening degrees. But they sure are cute.

What can parents do about this? Amused by angry parents, children under the age of three are difficult to discipline. It is amusing that a two year old can make an adult turn red in the face and lose control, and it is odd that small children can laugh aloud about it. Unless their parents are abusive, the toddler doesn’t fear the adult. They remain unimpressed by the show of parental frustration. As a result, the youngster doesn’t change undesirable behavior.

Toddlers are also often immune to punishment. Many parents send their two year old to a time-out location for being rough with the new baby. But when you ask the parents whether this punishment has stopped the toddler from being rough, they’ll invariably say no. These small people don’t make the connection between timeout and the importance of changing the preceding behavior.

One strategy that works with toddlers, however, is the judicious use of attention. Toddlers love attention. Attention, in fact, is partly why they repeat the behaviors their parents scream about. Screaming, lecturing, gesturing, combined with glares, provide attention. The child wants that attention, negative as it is, and will immediately repeat bad behavior.

Smart parents use attention to shape their toddler’s behavior. The trick is to give large doses of attention only when the child is engaged in the desirable behavior. For instance, suppose a toddler is squeezing the baby too hard. Some parents might say, “Be gentle with the baby. Look, you’ve made him cry.” In fact, this is the wrong time to speak to the toddler. Try not to talk to toddlers when they’re doing the wrong things.

Instead, the parent should take the child’s hand and move it softly over the baby’s body, saying “Look how sweet you are with the baby, so gentle and soft with him. You’re such a good big brother. The baby likes this so much. See how he looks at you?” Combine plenty of words and eye contact with a lot of expression, volume, and affection—when the toddler engages in the desirable behavior.

For every misbehavior write down the target or desirable behavior. Then either wait for the target behavior to occur spontaneously or help to make it happen, as in the above example. Remember to give your toddler plenty of positive attention.

This technique encourages appropriate behaviors and discourage inappropriate ones. When the toddler needs correction right away, which will sometimes happen, limit the number of words you use to five or less (no lectures, speeches, long explanations), speak in a quiet tone of voice and barely look at the child. Only do this if, for some reason, the child’s behavior must be dealt with immediately. Otherwise say nothing at the time and wait for an opportunity to give attention to the opposite, appropriate behavior. Attending to the desirable behavior is the most important discipline technique for young children.