Bullying in the Culture of Sport Coaching, Part II 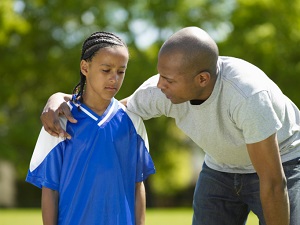 Recently, I wrote about my observations of sport coaches that act as bullies and gave some suggestions for what parents may do in response. I know that there are many instances of parents acting as bullies as well: shouting angry directives from the sidelines, punishing or showing a lack of support after a “poor” performance, demeaning their kids after the games based on their kids’ performance, or attempting to intimidate the coach with various complaints about things like playing time and the win-loss record. Recent news documents extremes of this, such as a story about a parent placed on probation for two years for threatening a coach for “benching” his child (2).

Contention with Coaches in the News
Some youth coaches experience the stress and fear of losing a job due to parent complaints. In Minnesota, lawmakers are considering a bill introduced by a former high school cross country coach. This bill would add a line to an existing statute on coaching contract renewals: “The existence of parent complaints must not be the sole reason for a board to not renew a coaching contract” (3). Supporters believe it will protect coaches facing the problem of parents that become over involved with their children’s sport participation, interfering with coaches and threatening their jobs when they don’t get their way. This bill was introduced after “the departure of dozens of Minnesota coaches, often amid pressure from increasingly vocal and demanding parents about more playing time or better roles for their high school athletes.” Supporters believe it will provide more protection for coaches who face annual contract renewal.

Now, it’s fair to say that parents do sometimes have legitimate complaints about playing time. There are some coaches who stack line ups for a “win” at the expense of development of players that comes with fair play time. This is particularly unhelpful within youth sport teams, in which development and practicing of new skills is sacrificed for being “competitive,” perhaps when the players could be taught other lessons, such as the value of fun and participation over winning at all costs. Some contexts may call for more “competitive” line ups, although that is also a source of contention, depending on who is making the judgment call and why, and the objectivity.

There are coaches who ignore parents’ legitimate complaints and concerns about their manner of coaching. I’d love to see coaches being held more accountable for their behavior when it is inappropriate. The power of youth coaches as leaders needs to be challenged and also strengthened. I am suggesting that parents do speak up more often when coaches act like bullies (yelling, demeaning, threatening, physical punishment for mistakes, etc.) Playtime and position are different matters, depending on the context. There are lots of coaches who are engaging in best practices, giving kids equal play time, not focusing on the win-loss record, and then getting criticism from parents because their team is not winning. I’ve witnessed some parents become disrespectful, undermining, and downright nasty to coaches who are attempting to do the right thing. These are common conflicts that detract from the team’s performance. If coaches and parents want to elicit best performance, these conflicts need to be addressed. The relationships between coaches and parents need to be addressed.

Schedule a Meeting before the Season Begins
I highly recommend that there be a preseason meeting between coaches and parents. Coaches and parents are part of the team, equal to the youth players, with their own important roles on and off of the field. If parents and coaches agree on what is most important at the outset of the season (equal play time, development, fun, winning, competition, demands for training time, rules for attendance, rules regarding alcohol and other drug use, performance enhancing drugs, nutrition), then when conflict arises or when a parent complains, there is a map in place to address it. If teamwork is important to the athletes, it needs to be shown by the “team” of parents and coaches.

Some coaches are bullies, we need to change that. Some parents are bullies; we need to change that, too. The coach can take a leadership role and address it more fully when we remove fear that a job will be lost. If a coach fears losing a job because a parent is threatening and complaining about playtime or position choices, that may also be considered bullying. That does not elicit the best performance of the coach, nor does it complement the players.

Tips for Coaches to Communicate with Parents and Reduce Bullying

Youth athletes have relationships with coaches that can be helpful or unhelpful to eliciting best performances. Coaches who bully do not elicit best performance; instead, it’s a toxic relationship. Similarly, the relationships between parents and coaches can help or hinder performance. It is difficult for coaches to perform well as a coach if they are stressed by inappropriate parent behavior, which in turn relates to athletes’ performance. If parents are bullying either the coaches or the players, the coach can exert leadership and address it. If addressed as part of policy before anyone sets foot on a field or court, the better the chances of reducing conflict that takes away from the ability of the coach to coach, and the ability of the players to do their very best. Relationships of all concerned are the foundation to making the team of players, parents, and coaches, perform at the best possible level. If you want to win the games, address the relationships. Make it known that bullying does not improve sport performance and will not be tolerated within any of the relationships on the team. Parents and coaches would do well to set a good example and demonstrate some teamwork.