Parent and Child: Whose Unbearable Feelings Are They? 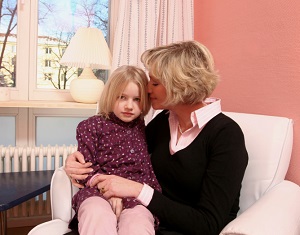 When parents identify too much with a child’s painful feelings, they can become overprotective and interfere with the child’s ability to separate and individuate. When these parents see their children struggling or suffering, they can act in ways to protect them from having what parents believe to be unbearable feelings. They may be assuming that the child is having the same, intolerable experience they had when they were children. These assumptions can lead parents to impede the child’s ability to learn to self-soothe and develop the ability to bear difficult feelings. The child and the parent remain undifferentiated in their emotional lives, making it difficult for the child to develop a separate, unique self.

It is not unusual for parents to come to my office feeling uncertain or conflicted about what to do when they experience their children having painful feelings. But some parents are extremely anxious and worried and feel a strong need to make these feelings go away. For these parents, the experience of a child being upset, angry, or distressed is impossible to bear. They typically report memories of when they were children and felt the same way.

“Joyce” began therapy by talking about her 9-year-old, “Sally,” who was having trouble sleeping. “It pains me so much to hear her cry,” Joyce said. “When she comes into my room at night, I have to let her sleep with us. My husband isn’t very happy about this, so mostly I go into Sally’s room and sleep with her. I have no choice. I know just how she feels and she so needs to be comforted.”

“Fred” came to therapy worried about his 12-year-old daughter, “Peggy.” She had never had a sleepover with friends and had never spent a night away from home. Fred and his wife had never taken a vacation away from Peggy. “I know it is time for me to start to encourage her to try and separate, but I know she is scared and I remember how horrible that was for me,” Fred said.

“Terri” was confused and scared when she started treatment. Her son “Alan” was 14 years old and had become very contentious and oppositional. “I can’t believe he is behaving this way,” Teri said. “I know he is a teenager, but I just don’t recognize him anymore. When he was younger, there was never any anger. We are such a no-anger family. My parents were horrible and always yelling, so I told myself I would never be that kind of parent. Both my husband and I have always been ‘yes’ sayers. Now I can’t stand what’s happening. We’ve given everything to Alan that he has ever wanted. What could he possibly be angry about?”

These three vignettes appear to describe specific problems in each family: sleep, separation, and anger. But for each family, the issue described is just one of the many problems which emerge for parent and child when intolerable feelings are present. In these uncomfortable situations, parents recall their own discomfort as children and seek to make what they perceive as their child’s pain disappear. This desire to protect their children is not the same as for the typical parent who is trying to figure out how to deal with a child’s sleep problems, social anxieties, or anger. Trying to determine when to comfort and when to help the child learn to tolerate some distress is part of the parenting process. But the parents I am describing are unable to see their child’s pain or struggle as something different from their own historical development. They are not only driven to protect the child, but are also consciously or unconsciously driven to protect themselves from the pain they experience when they remember their own suffering through their identification with their child.

Let’s look at these parents after two years of work in therapy:

As Joyce and I worked together, Joyce struggled to let Sally have her feelings. She knew rationally that she should not keep her home from school when she had stomach aches before tests or if she was having a problem with a friend. But Joyce just couldn’t bear thinking about Sally’s suffering: “I know it would be good for her to see she can do it, but I don’t think she’s ready. I guess I’m not ready.” When Sally was 11 and was to go on a week-long trip for school, at the last minute she got a stomach ache. Joyce told me, “I wanted to be able to help her go because I knew it would be a good experience for her. But she looks at me with those sad eyes, and I start to feel sad just like her. I still can’t do it. I couldn’t encourage her to go.”

Fred and I continued to work on his relationship with Peggy. When he heard about her social anxieties and lonely feelings, he liked feeling he could help and protect her. When Peggy was 14, she told Fred that she felt too awkward to go to the school dance with her classmates. He became wistful and said, “I know just how she feels. She really reminds me of myself. I suffered just like she does at her age. It’s awful to have to put yourself out there in that big social arena. I know she can’t feel very good about herself. We’ve been talking about how I should find a way to help her be out there and stop being Daddy’s girl, but I worry it’ll hurt her too much. I don’t think I could stand that.” As we continue to talk, Fred is beginning to understand that he can’t separate whose hurt he is worrying about—Peggy’s or his own. When he remembers this, it is easier for him to consider that Peggy may not be experiencing the same feelings that he did. He is getting closer to allowing Peggy to have her feelings and not act to take them away.

Terri and I talk a lot about anger. She is becoming clear that she has been protecting Alan from getting angry at her and her husband. She also has recognized that she and her husband had been sitting on their negative feelings with Alan. “I guess we were very permissive parents,” Terri said. “We never gave him anything to be upset about. I couldn’t stand to feel angry or see him angry. I guess we never modeled a way to say no or have a difference of opinion or feel anything negative in a strong way. I think I wanted Alan to be just like me. But he is still so angry, and it doesn’t even seem to be about anything.” Terri was thoughtful and sighed, “Maybe it’s his way of saying he’s not like us. It’s just so extreme. I want him to be like us.” Terri’s recognition of her need for Alan to be the same as her is very important. We have begun what I believe will be a fruitful exploration that will help her to express her interest in and acceptance of Alan as a separate person.

When parents identify with their children and treat them as if they are the same, children get the message, consciously or unconsciously, that they are, in fact, just like their parents and that parents want them to be the same. Seeing one’s child as “just like me” provides the parent with a sense of control. This diminishes the helpless feelings that are part of parenting. When a child senses that the parent feels helpless or is having other unwanted feelings, he or she becomes like the parent by behaving in ways to protect the parent from these painful feelings.

When parents identify and interfere with their children’s feelings, their children are not helped to separate and individuate. They do not learn that they can take care of themselves; that they can figure out ways to manage and tolerate unwanted feelings; that they are resilient; and especially that they are different from their parents. It becomes very difficult for these children to express their own, differentiated selves. These children have learned to limit the ways in which they can be in the world in order to protect themselves and their parents from unwanted feelings. They develop into people with low self-confidence and self-esteem. When parents overprotect in the ways I have illustrated, their children don’t believe they can take care of themselves. They remain reliant on parents (and as adults, on significant others) for self-definition and a sense of well-being.