On the Rocks: From Self-Medication to Self-Improvement 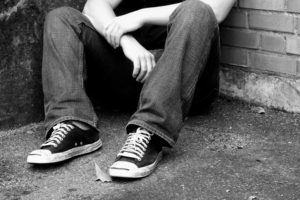 Growing up, all I ever wanted was to fit in. Throughout childhood, I really only had one or two friends. I never knew what to say around people. I just got nervous and would say nothing instead. Even when I was called on in class, my face would go red and I would laugh nervously, trying to get away from the attention as soon as possible.

In high school, I finally met a group of people who accepted me with open arms. The people in this group also felt rejected by others and and had banded together—and they also loved to drink.

We were a good group of kids. None of us had malicious intent, but we all had some demons we were struggling with. Our shared internal struggles caused us to band together, and we all drank together in order to try and bury those problems. What this meant is, when we drank too much, which was pretty much every time, we would get into trouble. We all started getting arrested often on possession charges or for general mischief, ticketed for underage drinking, and so on.

Eventually most of my friends moved away or headed in a different direction, but I stayed where I was and kept drinking. I became depressed and angry, and I finally reached a point where I needed to get blackout drunk every single day just to cope. When I didn’t have money for alcohol I would steal, beg, or find alternatives. I drank rubbing alcohol on more than one occasion during this time in my life. All the police officers in town knew me by name, and when they saw me stumbling around the streets they would stop me, knowing I would always be drunk or have drugs on me.

I was getting arrested several times a month when I was finally brought to court and told, “Enough is enough.” The judge ordered me to a juvenile detention center for 30 days to dry out.

While I was there, I felt better than I had in years. Dangerously underweight when I went in, I finally started eating regularly again and regaining my health. My emotions and moods were great, and I enjoyed joking around with the staff and other residents in the center, something I couldn’t have imagined doing even weeks earlier.

When I was released from the center, I had a new outlook on life, and at first, I followed through on my intentions. I got my driver’s license, moved to a new city, and made new friends. For a few years, I felt amazing. But what do you do when you feel amazing? You celebrate, of course! And how do people celebrate? With a drink! As soon as I started drinking again my life rapidly plummeted.

I started drinking tequila and doing cocaine at night, then trying to get to work the next day, while struggling through extreme panic attacks. I lost my job, then I lost my girlfriend, and then I was kicked out of my house.

I was literally homeless, sleeping in my car and using public restrooms to clean myself, when I hit my threshold. I couldn’t live like this any longer.

Was this really the life I wanted to be living? What kind of future would I have?

I was drinking away my rent money, so I had nowhere to live but the streets. Sleeping in my car was cramped, cold, and frightening. I could never really sleep because of the sounds of traffic and the fear someone might try to break into my car or the police would come by to make me move. Being dirty, cold, and tired was making me miserable.

I was constantly running from my problems. When faced with a difficult decision, I would just put my head in the sand and ignore it, hoping it would go away. But of course none of the problems ever did go away.

When I drank, I acted like a jerk to the people to around me, so I also was isolating myself from everyone I loved and cared about. I started drinking in the first place to be a part of a group of people who accepted me, but now my drinking was driving everyone away. I spent large amounts of time alone with my feelings of anger and depression, and I experienced anxiety constantly and had frequent panic attacks.

Drinking wasn’t good for my health, either. I had heartburn constantly and was puking all the time. I knew it would only be a matter of time before I died, if I continued to keep drinking like this.

Though I had so much pain in my life, suddenly the fog cleared. I had hit the wall, so to speak. And once that happened, I could see that I needed to make a change immediately. I knew I had to stop drinking. Before anything else could be done, I had to stop drinking. Though drinking wasn’t the root cause of my problems, I couldn’t deal with any of those problems unless I was mentally present. I tried the conventional methods of willpower and A.A., but I hadn’t been successful with either. I needed a different solution.

Once I stopped drinking I was sober but still depressed. I needed a deeper explanation for the difficulties I faced. I needed to identify and explore the reasons I drank and discover what I was hoping to achieve by drinking.

I knew that this time, I had to completely commit to constant self-discovery and improvement.

Once I knew what I needed to feel fulfilled, it was a matter of following through with it. There were good and bad days, but I persisted, learning everything I could about my anxiety, depression, social awkwardness and fear of rejection. The more I learned and actually applied to my life, the better I felt. I had already seen how low I could go, so now, I decided, it was time to see how high I could build myself up.

I had a long list of reasons why I drank. In my mind, everyone was at fault except the one person who really was—myself. The fact of the matter was, as long as I was holding onto my story of why I was different and why the rules didn’t apply to me, I wouldn’t get better. I had to realize that the only person responsible for my actions was me. I had to be the one to change the direction of my life.

I was constantly running from my problems. When faced with a difficult decision, I would just put my head in the sand and ignore it, hoping it would go away. But of course none of the problems ever did go away. Of all the things I put off dealing with, drinking was at the top of the list. But now I was tired, and I couldn’t keep running. I had to face the thing I feared most, head-on.

Though I began drinking initially as an attempt to connect with others, I ended up self-sabotaging out of fear. As I drank, I became better able to open up to people— at first. I was still very self-conscious, so I would keep drinking, but then I would end up blacking out and embarrassing myself.

Another important realization I came to was that I was using alcohol to self-medicate for mental health concerns. Any “improvement” I noticed was not, in fact, improvement. Rather, as I continued to drink I developed a new set of problems. My moods swung between depressed and enraged. My anxiety levels increased. Whenever I was in public I began to get intense panic attacks. I was eating terribly and was constantly out of breath, sweaty, and pale. These effects caused me to feel down and harsh toward myself, which led to the use of alcohol as punishment.

I had started to hate the person I had become, but instead of choosing to stop drinking or change my life, I instead used the booze to punish myself. Drinking went from being a way to connect with others to a way to systematically destroy myself. In the end, I realized I was trying to kill myself with alcohol.

I am grateful to be here and able to share this story with others. I hope anyone else who is currently in a similar situation can read this and know there are answers out there.

I took away three main things from my experience:

Bill Kearse created the Sober Foundations blog to share his struggle to stop drinking. His lack of success with conventional recovery programs led him to make his own way, and he chose to share his success in order to help others who are also seeking a different approach.