Not My Job to Save Her: Watching a Parent Grieve 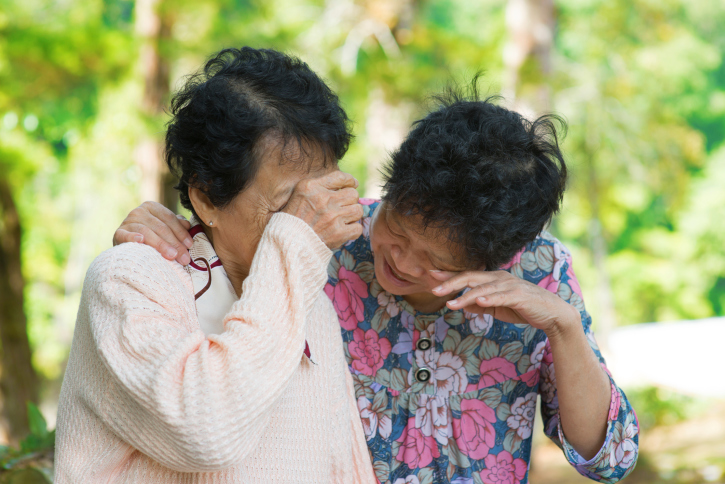 Losing my dad gave way to grief, the overwhelming life I lived for an entire year—a year of details I can barely recall. I was thrust into this whirlwind of a life that I had no control over, and the fog was just so thick. I couldn’t think, concentrate, breathe, or find my ‘happy’. I needed to get out, and I did. I stepped away from the excessive sadness, trying to move on and do what was best for me.

I realized I couldn’t fix her; I could take control of myself. So I moved on. You have to. I realized so many things, but most importantly: LIFE is a gift, and I wasn’t going to waste another year of my life lost in the fog while my husband and children just waited for it to lift. It was up to me. It was hard then, and it’s still hard. I speak of the decision to take a step back, let go, and let my mother find her own way through the grief of losing her husband, my dad.

Guilt. There is a lot of guilt. She’s my mother. She’s alone. Then there is anger, because—you know what? She’s not really alone; she chooses to be alone. She’s the one who shut everyone out. It’s a constant struggle between guilt and anger. I feel guilty for being angry, and then angry for having to feel this constant guilt. I love her, but she’s gone. She’s my mother, but she’s not the same. I’ve lost her, too. I lost her when I lost him, and as time passes it’s not getting better —just more evident that she can’t live without him. Then there is sadness, because how can I not be enough of a reason to go on? How can she look at her own child and grandchildren yet not want to fight for this life?

I just want my family back. I wish every day this didn’t happen. I wish everyday for my old life back, to hear my dad’s voice, to see my mom happy, and for me to feel secure in the fact that I had parents who would take care of me even though I was an adult. I want my kids to feel loved, and not always have to dwell on the fact my dad’s passing changed their grandmother. I want them to see her happy on special occasions, instead of always bearing witness to her crying. I want them to know, feel, and understand the heartache of death but also realize that there are 100 more reasons to live and go on.

We had a great relationship that was fun and loving. Now I’m taking care of her, guiding her, worrying, and making decisions. I feel it changing.

We have always been so close. Mother and daughter, yes, but also friends. We had a great relationship that was fun and loving. Now I’m taking care of her, guiding her, worrying, and making decisions. I feel it changing. She’s bitter, negative, unable to make a simple decision, and incomprehensible. She says she tries, but “trying” isn’t going to a therapy session and then taking the pills they prescribe with wine. Trying isn’t isolating herself from her family and friends. Trying isn’t drinking at home alone. “Trying” isn’t asking for advice, yet not taking it. “Trying” is doing what’s right, what’s healthy, and what’s in the best interest not only for herself, but for her family.

It’s been three and a half years of this. It’s exhausting. It’s sad and it’s hard. It’s hard to live and it’s hard to watch. It’s hard being 39 years old and suddenly not having parents. It’s hard being an adult and watching your “young” surviving parent age 10 years in three years. It’s hard to talk this way about your own mother. It’s hard for me because I realize from a medical standpoint she has depression; however, the steps she takes in her life are not always in the direction of recovery, or reaching toward finding her capabilities to cope with this loss. Her life isn’t over; there is so much love left in her life, yet she’s drowning. And I will not—cannot—drown with her.