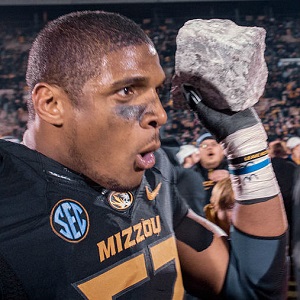 He might be the best defensive player not on a National Football League roster, a chiseled 6-foot-2, 255-pound, All-American hulk from a small town in ultra-conservative Texas.

He’s widely respected by his teammates, universally loved by his coaches, and has been lauded by President Obama for his strength.

Leave it to Michael Sam, a man who eats quarterbacks for breakfast, to make his own father lose his appetite.

In an interview with ESPN on Sunday, the former University of Missouri lineman revealed to the nation what close friends and teammates had known for nearly two years: he’s gay. His father, Michael Sam Sr., learned the news by text message days earlier while celebrating his birthday in a Dallas-area Denny’s. To say he was surprised would be an understatement.

“I couldn’t eat no more, so I went to Applebee’s to have drinks,” Sam Sr. told the New York Times in an interview he now disputes. “I don’t want my grandkids raised in that kind of environment.”

The Times also reported that Sam Sr. was uncomfortable with the idea of a gay player being in the NFL, even if that player happens to be his son. (He later disputed this as well.)

Reaction outside Sam’s family to the news has been mixed, with many high-profile football players and officials applauding his courage and others expressing concern about whether he will be accepted in NFL locker rooms, known for their hyper-masculine zeal. Some are convinced Sam’s stock has significantly fallen as a result of his announcement, that he will wait longer to be selected on draft day than he would have if he’d kept quiet about his sexual orientation.

Ready or not, though, he’s coming. Expected to be a mid- to late-round selection in May’s NFL Draft, Sam stands to become the first openly gay man to play at the top level of America’s most celebrated sport.

Depending on one’s vantage point, he’ll be scrutinized, admired, and scorned. No matter how he’s viewed, though, the implications of his revelation are inescapable.

“Michael Sam choosing to come out in the national media is a huge deal that makes a statement to LGBT adults and kids all over the United States that it is important to live your truth even when sharing that truth may have potential repercussions,” said John Sovec, a Pasadena, California-based therapist and GoodTherapy.org Topic Expert contributor. “Sam’s coming out also creates an alternative picture of who gay people are and how they should be treated. Perhaps his coming out will influence how potential bullies and homophobic members of society view gay people and can shed some light that the LGBT community is represented by all shapes, sizes, colors, preferences, and professions.

“Speaking openly about his sexuality opens the doorways for change and acceptance in a world that is still shaded with fear and lack of understanding of the LGBT community.”

Susan J. Leviton, who also writes about LGBT issues for GoodTherapy.org, said the timing of Sam’s announcement underscores his conviction.

“Each time a public figure comes out, it helps destroy stereotypes and demonstrates that gay people are not demons but rather a part of our community fabric,” said Leviton, a therapist based in Encino, California. “Michael Sam deserves our admiration and support, not only for coming out in football but for doing so at this particular time, before the draft, as it may affect his future career.”

Sam is an important part of a broader movement toward greater acceptance of gay people and gay rights, Leviton said.

“The great strides in gay rights have been due in large part to the many brave souls who have declared themselves to the world,” she said. “Few people in this country can now say ‘those people’; instead, it is ‘my brother’ or ‘my coworker.’ ”

Sovec said Sam’s announcement sets the stage for more people to come forward about their orientation.

“Coming out is a challenging decision for any LGBT person, as they are faced with the potential of being rejected, bullied, and ostracized by their friends, family, and community,” Sovec said. “Seeing an openly gay man, a well-respected player in a hetero-centric sport, choose to live his life honestly and with integrity has the potential to help both LGBT kids and adults feel more at peace with themselves.”

For more of Sovec’s thoughts on the Sam story, click here.

In other mental health-related news this week:

Facebook Goes Beyond ‘Male’ and ‘Female’ with New Gender Options

In an interview with Salon, model Sara Ziff talks candidly about the behind-the-scenes problems and abuses permeating the fashion industry.

Space missions are fraught with danger and couldn’t be more isolating, but the mental health risks that come with being an astronaut are rarely acknowledged. That’s about to change: A team of researchers is developing a computer program to help those in space manage depression and other issues.

When Rachel Fredrickson lost nearly 60% of her body weight on NBC’s hit show, earning $250,000, both the contestant and the network were heavily ridiculed in the media. The vitriolic response surprised the 105-pound Fredrickson, who says she was perhaps “too enthusiastic” in her efforts to slim down in preparation for the season finale but insists she does not have an eating disorder.

Early Treatment for Depression May Be Good for the Heart

A study shows that a combination of antidepressants and psychotherapy can help people with depression cut their risk of heart attack and stroke by nearly half.

Investigation Reveals ‘Chaotic’ Handling of Sex Abuse in the Military

An investigation by The Associated Press into alleged sex crimes reported on U.S. military bases in Japan uncovers questionable handling of such cases. Among the findings: offenders who get prison time are in the minority.

Mental Health Statistic of the Week

The global cost of mental health issues in 2010 was estimated at nearly $2.5 trillion, a figure expected to rise to more than $6 trillion by 2030, according to the National Alliance on Mental Illness Chicago.

Feel-Good Story of the Week

Full circle: Michael Sam’s announcement was met with much consternation in his home state, but not from Dallas sports anchor Dale Hansen, who thinks a gay man should be the least of the NFL’s worries. Check out Hansen’s much-talked-about segment below.