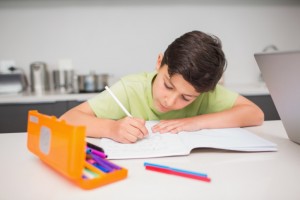 Joan was at the end of her rope. She had just received another note from her son Sammy’s fifth-grade teacher about issues with his behavior. It seemed like school became increasingly difficult for Sammy each year. Joan knew Sammy was smart, and it was hard to see his confidence eroding as he struggled to keep up with classmates.

Sammy had been diagnosed with attention-deficit hyperactivity (ADHD) in third grade. The diagnosis helped Joan make sense of the chaotic mornings, the struggles with getting homework done, and the challenges of getting Sammy to bed each night. While Sammy could focus just fine on his computer games, he was otherwise impulsive and forgetful. It often seemed like he wasn’t listening or couldn’t remember simple requests.

While having the label of ADHD was helpful in understanding what was going on, it was still taxing and stressful for Joan and their family. She and her husband disagreed about how much to push and how much to support Sammy. They tried medication. It helped a little, but Sammy said he didn’t like the way it made him feel. The school made accommodations to help Sammy be successful, though that wasn’t enough, either. Joan wished there was another option for helping Sammy.

Soon after Joan received the note from Sammy’s teacher, a friend of hers mentioned a non-drug treatment for ADHD called neurofeedback (NFB), or brainwave biofeedback. While Joan had never heard of NFB, she was impressed that the American Academy of Pediatrics had designated NFB as a level one, evidence-based treatment for ADHD. She was open to trying something that might help Sammy and called the number her friend had given her. When she went for the initial consultation, the therapist took a detailed history, told her NFB could help with Sammy’s ADHD, and explained the process.

First, Sammy had a brain map, also called a quantitative electroencephalogram (QEEG). Readings of brain waves from multiple sites on his skull are compared to a normative database. This analysis provides information about his brain function and guides treatment.

Sammy’s map showed evidence of ADHD, which is indicated by too many slow waves compared to faster waves in the front of the brain (where our executive functioning is located). It was encouraging for Joan to clearly see Sammy’s diagnosis in his brain map and to understand the goal of changing that wave ratio.

Sammy’s map showed evidence of ADHD, which is indicated by too many slow waves compared to faster waves in the front of the brain (where our executive functioning is located). It was encouraging for Joan to clearly see Sammy’s diagnosis in his brain map and to understand the goal of changing that wave ratio.Sammy had two to three training sessions a week for several months. At each session, four sensors were put on Sammy’s scalp to measure the types and amount of brain waves at each location. He simply relaxed and watched a movie he picked. The screen provided feedback by dimming or brightening the picture depending on how Sammy’s brain was functioning. This real-time feedback helped Sammy modify the way his brain functions. Unlike with his medication, Sammy experienced no uncomfortable side effects.

After five sessions, Joan could tell that Sammy was sleeping better, and after 10 sessions homework seemed like less of a struggle for him. Sammy’s teacher even noticed improvements and asked Joan what had changed.

Joan and Sammy represent people I frequently see in my neurofeedback practice. Many parents are looking for ways to help their children cope with ADHD, and neurofeedback is an excellent but often overlooked option.

Neurofeedback is a type of biofeedback. Biofeedback uses multiple types of physiological information to provide feedback. For example, information about heart rate, temperature, sweat levels, breath, and muscle tension can be used to provide information. People can improve their health and performance by modifying these physical processes based on the feedback. Neurofeedback uses brain waves to show how the brain is working. Just like learning any new skill, this training takes practice and time. A minimum of 20 sessions are generally needed to cement changes. NFB is relatively expensive in the short term, but it can be a wise investment over the long term when compared with the expense and side effects of medication.

The efficacy of NFB is backed by recent research (2014), and the therapy model is supported by accredited organizations. If you are trying to find a therapist who specializes in neurofeedback, always look for a provider who is certified by the Biofeedback Certification International Alliance. Practitioners who are board certified in NFB have met strict criteria for training and experience. For more information, you can go to the websites of two organizations dedicated to NFB and biofeedback: the International Society for Neurofeedback and Research and the Association for Applied Psychophysiology and Biofeedback.