Music May Ease Anxiety in People Who Have Dementia 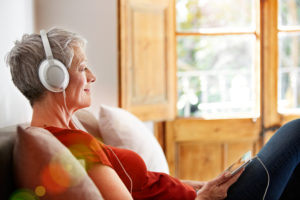 Dementia affects more than just memory. The loss of cognitive functioning can make the world seem increasingly unfamiliar and frightening. People with dementia commonly struggle with anxiety and depression as the disease progresses.

According to an upcoming study in The Journal of Prevention of Alzheimer’s Disease, music may ease this anxiety. The study found music may activate areas of the brain unaffected by dementia. Music may offer a soothing and familiar feeling to people experiencing dementia.

How Music Affects the Brains of People With Dementia

The study included 17 people with dementia and their caregivers. Researchers spent three weeks helping recruits select personally meaningful songs. They taught caregivers how to play the songs on a portable music player.

As recruits listened to the clips, researchers observed their brains through functional magnetic resonance imaging (fMRI). FMRI measures oxygen and blood flow to the brain while the mind is working.

Although the results are promising, they are not conclusive. The researchers caution that the sample size was small. Plus, the study only held a single fMRI study for each person. It is uncertain whether music’s effects persist or if there is only a short-term boost in brain activity.

If future research supports the study’s findings, then music could be an affordable way to improve the lives of people with dementia.

Tips for Using Music to Help People With Dementia

According to the Alzheimer’s Association, music can ease the distress caused by Alzheimer’s (the most common type of dementia). Music can help people engage with their environment, even after severe cognitive decline.

When using music to help people with dementia, the Alzheimer’s Association recommends the following strategies:

People who are affected by dementia, whether directly or indirectly, may wish to get help from a therapist.