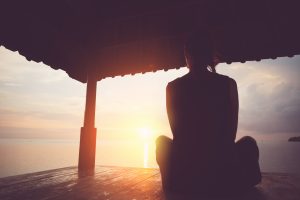 New evidence suggests the benefits of mindfulness meditation are not limited to people with a naturally mindful perspective. This finding may help to counter the notion that meditation is only useful for people who already identify with the practice.

Emotional reactivity refers to the intensity of responses to events that provoke strong emotions. One of the benefits of mindfulness meditation is reduced reactivity involving negative emotions, making it especially helpful as a potential treatment for people with a wide range of mental health conditions, including posttraumatic stress. Even for people without a clinical diagnosis, excessive emotional reactivity can be a source of regular discomfort.

Researchers wanted to examine the effect of a person’s sense of mindfulness on the relationship between mindfulness meditation and emotional reactivity. The sample was comprised of 68 female undergraduates, who were randomly assigned to one of four groups. All groups were directed to view a collection of pictures designed to elicit a strong emotional response. Before doing so, participants either listened to a guided meditation exercise or a control lecture on learning a new language. Half of the people who meditated and half of the people who listened to the lecture were asked to look at the pictures with mindfulness, regardless of how naturally mindful previous questionnaires had shown they were.

Despite having varying levels of natural mindfulness, all participants who meditated were able to keep any negative emotions in check. The researchers say these findings suggest the benefits that typically come from mindfulness may be best achieved through mindfulness mediation, rather than trying to force the state of mind without meditating.

New York Governor Andrew Cuomo recently approved a law that will require all schools in the state to teach mental health topics as a part of their regular curriculum. Emotional or behavioral problems lead to more students dropping out of school often due to a lack of support. Psychological well-being will now be added to a 40-year-old mandate that requires education about drugs, alcohol, tobacco, and cancer to be included in yearly teaching materials. The law will take effect in July 2018.

Why Watching Silly Cat Videos Is Good for You

Many people may feel online activity such as watching funny or cute videos of animals seems like a waste of time, but new research suggests this type of entertainment can significantly lower stress and increase happiness. The results of the research also show interacting with people via shared content (like cat videos) and social networks may improve memory, increase feelings of self-worth, and provide a source of support. Neuroscientists say this is a result of the shot of dopamine that happens when a brain’s reward system is activated, which can happen when receiving a “like” or a comment on a shared post.

According to the United States Army’s director of psychological health, one in five children of Army service members will need mental health treatment within their first 16 years of life. The numbers are similar to those seen in the general public, and like the public, the Army is currently in the midst of a crisis as mental health services cannot keep up with demands. In response, new programs are being instituted to help prevent the development and/or worsening of mental health conditions at an earlier age.

Doll Therapy May Help Calm People with Dementia, But It Has Critics

Doll therapy has been catching on as an alternative treatment in extended care homes for people with Alzheimer’s, and some residents have been responding positively to the sense of calm the dolls can provide. However, the mechanisms for any observed improvements are currently unknown and mostly unstudied. Proponents say doll therapy can lessen the need for medication and reduce distress, while critics have voiced ethical concerns about dignity for aging seniors.

Recent comments about posttraumatic stress (PTSD) from Republican presidential nominee Donald Trump have highlighted how misunderstood the condition remains, despite numerous studies. Much of the issue may stem from the difficulty of translating the PTSD experience to generally relatable terms. Because of the brain’s plasticity, scientists have shown any experience can change the brain, especially psychologically traumatic experiences. It is suggested that categorizing PTSD as a syndrome rather than a disorder may help to better communicate it as an injury in response to a traumatic event and not a preexisting condition.

Adolescent girls who have a family history of breast cancer and/or a related gene mutation do not appear to experience any related psychological symptoms. New technologies have made it easier to know if someone is at a higher than usual risk of developing breast cancer. Interviews with the females studied showed that even when they were aware of the risk, they scored no lower on any mental health factor than control participants. They even scored significantly higher on self-esteem. Instead of causing additional stress, having this knowledge may act as a buffer for mental well-being.

Women who perceived themselves as having frequent nightly hot flashes may be more likely to experience mild depression-related mood disturbances. A small study of 29 healthy pre-menopausal women used a medication to simulate menopausal symptoms. Participants took the drugs over a period of four weeks and completed questionnaires to relate their sleep experiences. Reports of hot flashes and sleep interruptions were found to be significantly associated with the development of mild depression.