Mindfulness As a Tool for Quitting Smoking 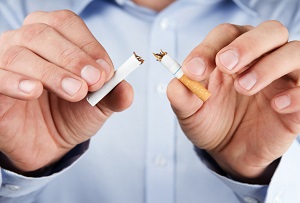 Smoking is a common habit with significant health-related and economic costs. Nearly five million deaths annually are estimated to result from smoking. Although more than half of smokers indicate a desire to quit, quitting remains a formidable challenge for many, as cravings can be powerful and both biologically and psychologically driven. In addition to nicotine dependence, the smoking habit is maintained through repetition and reinforcement. As an example, smoking is positively reinforced via the experience of “reward” and negatively reinforced by the removal of unpleasant physical and emotional sensations that can occur during withdrawal and at times of stress. Conventional approaches to smoking cessation have typically focused on reducing exposure to triggers, engaging in distraction, substituting other behaviors, and efforts to reduce stress in general. These approaches have been associated with only modest success, however. Additionally, smokers are vulnerable to relapse.

Mindfulness, which is commonly described as present-moment, nonjudgmental awareness, can be an effective tool for riding out cravings and “sitting with” the distress associated with the quitting process. Furthermore, mindfulness can help foster an attitude of acceptance of present-moment challenges and thoughts (such as, “Quitting feels extremely difficult, and sometimes I worry I can’t do this.”). Acceptance can help one to ride out these moments, understanding them as temporary, rather than being overwhelmed by them. Mindfulness has been shown to be helpful in preventing depression relapse, reducing anxiety, managing chronic pain, decreasing insomnia, and for a number of other issues.

A recent study compared mindfulness training (MT) with the American Lung Association’s “Freedom From Smoking” (FFS) program. Eighty-eight participants were randomly assigned to one of the two groups and received twice-weekly, manualized group sessions of either MT or FFS for four weeks. The participants were then followed for another 13 weeks and their smoking behavior was assessed at several points during and after the initial four-week treatment period. Participants were neither encouraged nor discouraged from using medications to help them quit, but few participants used any during the trial period.

The MT condition consisted of instruction related to fostering awareness of the present moment, acceptance of cravings and distressing emotions, as well as education about how smoking becomes a habit via exposure to environmental, physical, and emotional triggers. The participants were also taught loving-kindness meditation, which is a form of “directed well-wishing,” and other related techniques. The FFS program emphasized behavior modification, stress reduction, and relapse prevention.

What the researchers found is that during the active treatment period, individuals in both the MT and FFS groups experienced significant reductions in their smoking, and treatment gains were maintained during the follow-up period. However, receiving MT was associated with a greater reduction in cigarette use than receiving FFS. Individuals in both groups were encouraged to engage in at-home practice of the skills they learned. Within the MT group, increased at-home practice was associated with less cigarette use at the end of the treatment period, and this result approached, although it did not reach, statistical significance. Overall, those in the MT group showed a greater trend toward abstinence, and this difference was significant by the end of the follow-up period. Because few participants in either group used medications to help manage cravings, it is unclear whether the addition of medications to either program would have resulted in more pronounced benefits.

Mindfulness is associated with a number of benefits, including reductions in smoking behavior, and thus it appears to be a worthwhile treatment for those hoping to quit. There are many ways to learn mindfulness, including via formal training, within the context of psychotherapy, and on one’s own using one of the numerous books or audio programs available. For more information, please consult the resources below.